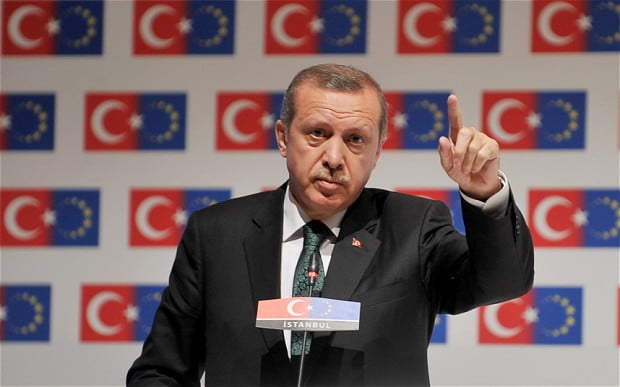 Prime Minister Recep Tayyip Erdoğan paid a visit to Brussels this week to meet officials from the European Union. The talks between Erdoğan and EU officials were considered to be crucial by many in terms of Turkey’s accession bid to become a member of the EU, since it was Erdoğan’s first visit to Brussels in five years.

What made the visit more crucial was in fact the latest exchange of words between Erdoğan and top EU officials. Following the recent developments in Turkey after a major corruption investigation that broke out on Dec. 17, 2013, which forced three ministers resign, representatives of the EU expressed their concerns regarding the Turkish government’s handling of the situation. On Dec. 27, European Union Commissioner for Enlargement Stefan Füle issued a statement urging Turkey to ensure that the country’s ongoing corruption investigation is conducted in a transparent and impartial manner.

Füle made another statement last week on his Twitter account, saying had discussed with Council of Europe Secretary-General Thorbjorn Jagland “common concerns about recent developments in Turkey regarding rule of law & independence of judiciary.” Those statements came amid the Erdoğan government’s attempts to dominate the judiciary by drafting a bill to transfer the powers of the Supreme Court of Judges and Prosecutors (HSYK) to the Ministry of Justice and through a major purge among police and prosecutors, including the prosecutors who launched the corruption and bribery investigation that has shaken the government.

Milliyet columnist Kadri Gürsel wrote on Thursday that it seems like Erdoğan was not able to convince EU officials that his government was a victim of a coup attempt by a “parallel state.” Gürsel added that the response to Erdoğan were slightly harsh warnings in a considerate manner. According to Gürsel, the EU officials probably realized that a coup attempt could not have been broken up by removing prosecutors from relevant cases and it was clear that none of the judicial practices violated the law during the process of the corruption investigation. Gürsel quoted Herman Van Rompuy, president of the European Council, as saying: “In our talks we addressed the current developments in Turkey since Dec. 17. I stressed that Turkey as a candidate country is committed to respect the political criteria of accession, including the application of the rule of law and separation of powers. It is important not to backtrack on achievements and to assure that the judiciary is able to function without discrimination or preference, in a transparent and impartial manner and I welcome the further dialogue on this between Turkey and the European Union.”

Gürsel also wrote that EU Commission President Jose Manuel Barroso stated in his remarks that Erdoğan gave EU officials “reassurances of his intention to fully respect the rule of law, the independence of judiciary and … separation of powers.” “If Erdoğan sincerely reassured his counterparts that he would stick to democracy, which we hope, the first thing he should do is throw out the HSYK bill, which aims to completely dominate the judiciary,” Gürsel said.

Hürriyet’s Sedat Ergin wrote in his Thursday column that Erdoğan probably spent most of his time in Brussels trying to convince EU officials of the existence of a parallel state dominating the judiciary. According to Ergin, the Hizmet movement has now become a top issue in official talks between the Justice and Development Party (AK Party) and the EU, reminding readers about Erdoğan’s reference to the Hizmet movement as a “parallel state.” Ergin wrote that Erdoğan had a hard time convincing the EU, who were also concerned over the revelation of documents indicating the government’s interference in the judiciary.

Calling out “Come, whoever you are”, Turkish Festival by Rumi Forum am Rhein drew tens of thousands of people from Turkish, German and many more nations on April 19-21. The board president of Rumi Forum Fatih Yilmaz expressed their pleasure with the large interest towards the festival marking its 2nd anniversary, revealing that they intend to establish it as an annual tradition.