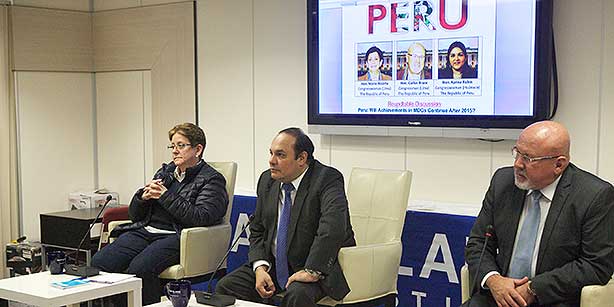 To consolidate his power, President Recep Tayyip Erdoğan doesn’t hesitate to seize Turkey’s critical media companies by abusing state power. He controls the government; even though the Turkish Constitution limits the president’s executive powers, and he manipulates the judiciary system despite the fact that the separation of powers is an indispensable part of Turkey’s constitutional design.

Comparatively, Peru’s transition to democracy in the 1980s and 1990s was similar to what Turkey is experiencing today. Peru experienced a transition to democracy at the beginning of the 1980s, and Peru’s president, Alberto Fujimori, took office via democratic elections. However, faced with an economic crisis and a destabilizing insurgency, Fujimori proceeded to take Peruvian politics in a distinctly authoritarian direction.

Having public support in 1992, Fujimori plotted a self-coup, calling off the legislature, suspending the constitution and silencing the entire opposition. By controlling the media and election processes, he won the election in 1995. However, this also led to a decline in his popularity and growing concern over the regime’s use of undemocratic electoral tactics, which included the bribery of journalists and media owners, the manipulation of state resources for political ends and the harassment and defamation of opposition figures. Fujimori needed to rely on the military and the state intelligence services; however, his abuse of state power did not prevent him from meeting his fate, and in the year 2000, due to corruption and human rights violations, he ended his political career by fleeing the country.

Many believe that Erdoğan is also going down a similar path.

Although Peru still faces some difficulties, the Peruvian democracy has progressed considerably in the past 15 years.

On Saturday, congress members Carlos Bruce and Maria Lourdes Alcorta of Peru paid a visit to the Peace Islands Institute in New York for a round table discussion moderated by Ambassador Carlos Garcia, the former permanent representative of El Salvador to the UN, to speak about the political, social and economic situation in Peru.

“Peru is a democratic government which is based on the separation of three powers, of course, an executive, a legislature and a judiciary. The freedom of the press, freedom of expression, freedom of religion, freedom of ideologies and no re-election of presidents; it is limited to a five-year term.”

“However, we discovered democracy through ups and downs. We faced dictatorship during the Fujimori era as well. The reason for his success was because of his recovery of the economy. However, since 2000, we have had a very strong democracy in the country. We have a very strong constitution and there is no power that can challenge it anymore. I believe that after the Nov. 1 election, Turkey will also overcome its problems as well,” she added.

Congresswoman Alcorta also pointed out that there are not any imprisoned journalists in Peru, which is an indication that there is freedom of the press in the country.

“The congress has a lot of instruments that can check the executive branch. We can impeach a minister with a small percent of the majority. The president can assign a minister; however, congress has the power to veto that. There is no possibility of re-election for a president. Fujimori has been elected three times with the alliance of the armed forces. The president cannot be impeached or prosecuted, although this could be possible after he leaves office,” Bruce added.