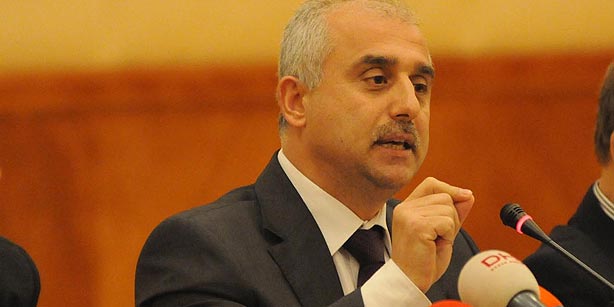 İSTANBUL
The Journalists and Writers Foundation (GYV), whose honorary chairman is Turkish Islamic scholar Fethullah Gülen, has categorically rejected accusations that it is linked to the corruption and bribery investigation that has rocked Turkey for nearly a month, urging everyone to avoid language that only deepens the “dangerous polarization” in the country.

Mustafa Yeşil, chairman of the foundation, told reporters in İstanbul on Tuesday that it is unfair to create what he called “scenarios” that the Hizmet movement is behind the graft probe that has implicated the sons of three ministers and businessmen as well as the head of the state bank. He recalled the “undeniable” service of the ruling Justice and Development Party (AK Party) government in terms of advancing democracy in the country, adding that the Hizmet movement is aware of the government’s contribution to Turkey’s democratic achievements since 2002, when the AK Party came to power.

He noted that the Hizmet movement’s principled stance with respect to democratization, the rule of law and freedoms — including freedom of religion — and its firm position against any type of tutelage was the most important factor in its standing behind the ruling party for the past decade.

Yeşil added that it is absolutely unacceptable to link the corruption investigation with the Hizmet movement, blaming politicians for using deeply polarizing language and leveling unfounded accusations against the movement.

Yeşil said the spat with the government became public and visible during the Hizmet movement’s opposition to the closure of exam preparatory schools and that the government’s intention to shut down these educational facilities rang alarm bells in terms of the democratic standards of the nation.

The GYV chairman said corruption allegations had also been voiced in the past but that the language politicians have been using since Dec. 17, 2013, when police arrested dozens of suspects, is “exceptionally offensive and polarizing.”

The government of Prime Minister Recep Tayyip Erdoğan has responded to the corruption investigation by sacking hundreds of police officials and bureaucrats while seeking tighter control over the judiciary.

Erdoğan has portrayed the wide-ranging corruption investigation, which poses one of the biggest challenges of his 11-year rule, as an attempted “judicial coup” meant to undermine him in the run-up to local and presidential elections this year.

The corruption probe has helped drive the lira to new lows and shaken investor confidence in a country whose stability has been largely derived from Erdoğan’s strong grip on power.

But it is the government’s reaction, seeking tighter control over courts, police and even the Internet, that could do deeper long-term damage, not least to Turkey’s ambitions to join the European Union and its relations with Washington. Both are already critical of its human rights record.

On Tuesday, Erdoğan described the corruption probe as a “black stain on Turkey’s democratic history” and claimed “it has surpassed all previous coup attempts, and has been recorded as a betrayal to the state, democracy and the nation.”

Erdoğan also spoke about a “virus” within the state, referring to the Hizmet movement, likening it to the Hashishiyyas (Assassins).

Yeşil vocally rejected the label, saying the goal of the Hashishiyyas was “murder” and that it is absolutely unacceptable to draw parallels between the Hizmet movement and a “community of killers.”

Efforts to describe the Hizmet movement as a gang after the corruption probe, Yeşil said, were an attempt to change the agenda. He said claims that the Hizmet movement would prefer an alternative ruling party without Erdoğan are groundless and do not reflect the truth.

The chairman stressed that the Hizmet movement is deeply concerned about the suspension of the law, — referring to the fact that the government has endorsed a series of anti-democratic laws related to the judiciary — the removal of nearly 2,500 police officials, interference in the judiciary, a move to restructure the Supreme Board of Judges and Prosecutors (HSYK) and the polarization of political rhetoric.

The GYV chairman also challenged the allegations about a political gang, asking those who make such “baseless claims” to confront them in court with the evidence. He warned against invasion of privacy and other restrictions on freedoms, saying that illegal activities should only be tackled through legal means.

He said making accusations against a community that has taken educational facilities to 160 countries all across the world without any evidence is saddening and a cause for concern. He added that the government’s claims about an “organized junta within the police and the judiciary” stand in contrast with its previous statements praising the police and the judiciary during the Ergenekon and Balyoz (Sledgehammer) coup trials and the Gezi Park protests.

Yeşil said the Hizmet movement believes that a return to EU membership negotiations, democratization, upholding the rule of law and making sweeping reforms are the only way out of this political turmoil. He recalled Gülen’s letter to President Abdullah Gül, in which he said the Hizmet movement “would take 10 steps, if others make a step forward in these processes.”

He added that if the suspects had been referred to the judiciary and if the judiciary had lived up to its role without any government interference, the subsequent political turmoil would not be taking place.

When asked about telephone conversations believed to be between Gülen and his friends, that surfaced on social media on Monday night, Yeşil said it is the responsibility of the state to unveil those behind this illegal wiretapping. He stated that he does not know if the conversations are valid, but assuming they are authentic, there is nothing illegal about them.

Several telephone conversations between Gülen and unidentified people surfaced on social media on Monday night in which members of the Hizmet movement ask Gülen’s opinion about a government attempt to sink BankAsya.

Yeşil said there is an attempt to portray contact with Gülen as “illegal” and that it is totally normal for businessmen to ask Gülen’s opinion.

Turkish Islamic scholar Fethullah Gülen will file a criminal complaint against those responsible for illegally wiretapping many of his phone conversations with friends, Gülen’s lawyer Nurullah Albayrak said in a press statement.

Albayrak has called on prosecutors and officials to expose an illegal organization in Ankara believed to be responsible for wiretapping influential figures’ phone calls and also for a campaign of defamation.

His statement came after phone records of Gülen speaking about efforts to shut down private financial institution Bank Asya appeared on a number of websites on Monday, deepening concerns over the privacy of individuals amid an ongoing graft scandal that has encircled Prime Minister Recep Tayyip Erdoğan’s government.

“There is broadcasting and reportage on some websites and newspapers violating norms of privacy of communication in terms of wiretapping and recording conversations between individuals. Presenting the phone conversation [Gülen’s phone conversation with a friend] as an illegal situation when in fact the content includes nothing that could be considered illegal is unfair and unlawful,” said Albayrak.

Gülen’s lawyer said he would start a legal process against those newspapers who run stories in violation of Turkish Penal Code (TCK) Law No. 132 and 133 and against those who played a role in the wiretapping.