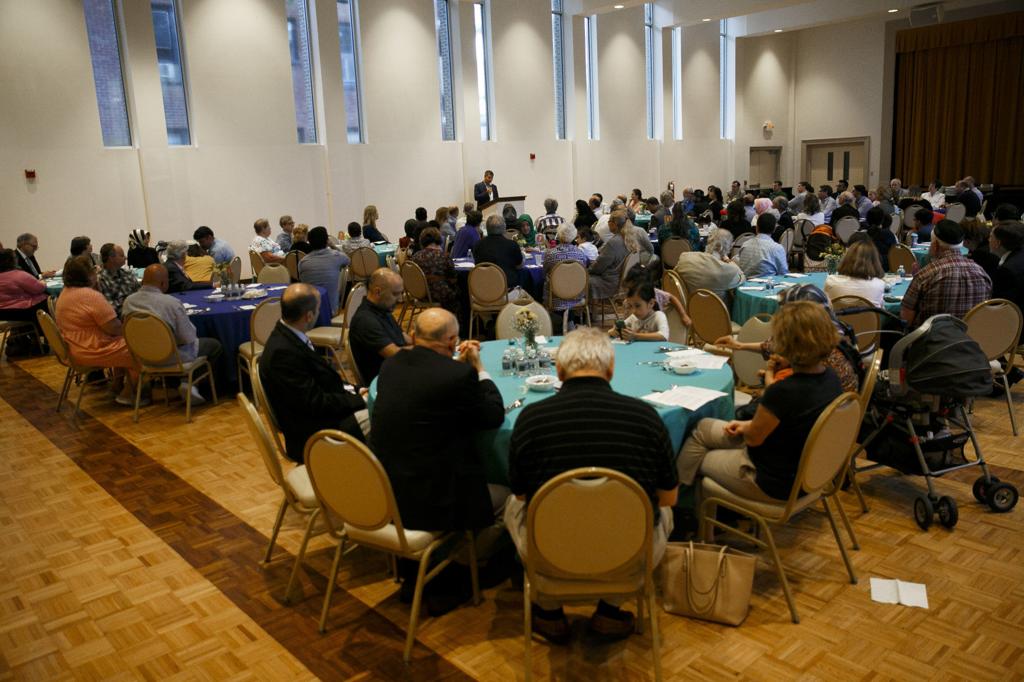 Two years ago, living in his native Turkey, Abdulhamit Bilici never could have imagined his situation today.

Exiled. Living in a country he had previously only visited for work. Away from his friends and family and watching from afar as thousands of Turkish doctors, teachers, professors and more have been jailed.

It all started the day his newspaper, Zaman, became one of many seized by his country’s government.

Out of work and afraid of what was coming, he left the country. Eventually, he purchased a one-way ticket to America and is now, like thousands before him, a Muslim immigrant.

“I am fortunate, though,” Bilici told a packed dining hall at Ohef Sholom Temple in Norfolk on Wednesday night. “Telling my story is the only way I can help raise awareness for my friends in Turkey.”

More than 100 people gathered for an iftar dinner – the evening meal in which Muslims break their fasts during Ramadan – at the temple. Partnered with the Rumi Forum, an interfaith and intercultural organization, the shared meal was meant for people of different faiths to learn more about each other.

“It’s a beautiful way of getting to know our brothers and sisters by experiencing and learning from each other,” Akpinar said.

As the sun set and the scent of red lentil soup wafted through the hall, Jewish, Muslim and Christian worshippers prayed and dined, united.

The temple has held many iftar dinners over the years, said Rabbi Rosalin Mandelberg of Ohef Sholom. Despite the difference in religious beliefs, attendants often find they’re more alike than they would believe.

“Peace has to start in relationships between people, and you can only build those relationships by getting to know each other,” said Mandelberg . “It’s too late to wait until a crisis occurs to come together.”

It’s about building bridges while breaking bread, she said.

Rabbi Israel Zoberman, a Kazakhstan native, the child of two Polish Holocaust survivors and founding rabbi of Congregation Beth Chaverim in Virginia Beach, has led congregations for more than 40 years.

Zoberman teaches at his own temple but at the Eastern Shore Chapel Episcopal Church.

The idea that people of different faiths are willing to learn from each other gives Zoberman hope, he said, and interfaith gatherings are critical to attaining peace.

“What we share in common far outweighs our differences,” Zoberman said.

Bilici said like parts of Turkey, many communities across America are polarized. He said he hopes more people will take the time to learn about their neighbors.

“If someone encourages you to hate your neighbor because of who they are, do the opposite.”

Multicultural Mosaic Foundation in Denver, Colorado, recently held its traditional Dialogue and Friendship Dinner at one of the city’s prestigious venues, Cable Center. Having the author-journalist Mustafa Akyol, on his “Islam without Extremes” promotion tour, as its keynote speaker, the event saw the attendance of several assembly members and senators of the states Colorado and Wyoming.