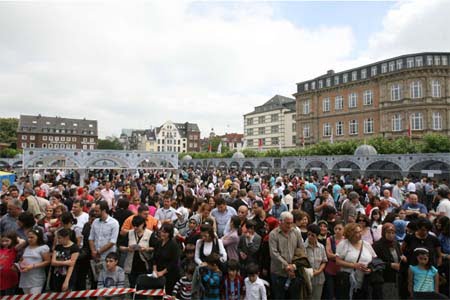 Hagia Sophia Museum, Sumela Monastery, Karagoz-Hacivat (traditional Turkish shadow entertainment) Turkish song and folk dance performances, marbling and calligraphy art demonstrations… All these and many more were in Dusseldorf over the last weekend.

Calling out “Come, whoever you are”, Turkish Festival by Rumi Forum am Rhein drew tens of thousands of people from Turkish, German and many more nations on April 19-21. Turkish Consul General to Dusseldorf Firat Sunel expressed his pleasure with the festival as a cultural event rather than a trade fair.

The performances by music and dance groups at Turkish Festival inviting thousands to Apolloplatz with the call “Come, whoever you are” captivated the audience. Tens of thousands from diverse nations flooded to the festival ground and had the opportunity to see Turkish cultural heritage closely. Under the auspices of Turkish Consulate General in Dusseldorf, the festival, which was held to get the Turkish and German communities to know each other more closely and to remove the prejudices towards one another, was sponsored mainly by Burc GmbH and Maxi Markt.

Among the highlights of the festival were Karagoz-Hacivat shows, traditional art demonstrations including marbling, calligraphy, tile, glass blowing as well as Turkish cuisine presentations. The German visitors having tasted unparalleled Turkish food and enjoyed the music commented that the festival contributed a lot to the intercultural fellowship and, thanks to the festival, they had the opportunity to learn about historical and cultural attractions of Turkey. They said such events should be annually organized.

Turkish Consul General to Dusseldorf Firat Sunel highlighted the coincidence of the festival with the Blessed Birth and April 23 Children’s Festival within the same week. “The miniature historical displays and demonstration here not only bring the Turkish community closer to its culture but introduce the rich Turkish culture to people from diverse nations as well. At such events, in general, food overshadows cultural promotion and souvenirs turn events into trade fairs. There is no redundant presentation here. I am so glad to see the food and culture harmonized” Sunel said. He noted that this festival, in this regard, should offer an example to other similar events as these events benefit greatly the promotion of Turkey and transfer of cultural legacy to the new generations in Germany.

The board president of Rumi Forum Fatih Yilmaz expressed their pleasure with the large interest towards the festival marking its 2nd anniversary. Revealing that they intend to establish it as an annual tradition, Yilmaz thanked the consul general Firat Sunel particularly, the sponsors, attendees and everyone involved.

Bülent Korucu April 8, 2012, Sunday James C. Harrington has a brilliant career as a lawyer who has practiced for 40 years and as a professor who has taught law in universities for 25 years. But what is even more important is his sensitivity to and struggle for human rights. He is one of the […]