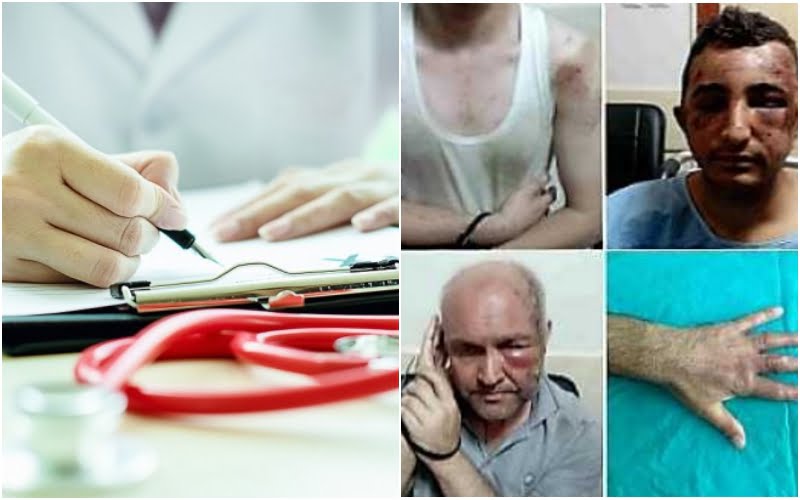 Amid widespread reports that doctors working at state hospitals are pressured to cover up torture and ill-treatment at Turkish detention centers and prisons, the Governor’s office in Turkey’s northwestern province Çanakkale launched a probe into doctors who issued medical reports to suspects alleged to be affiliated with Gülen movement.

The move is seen as part of escalating government pressure on doctors who may issue reports that document torture, abuse as well as medical conditions that suspects suffer during detentions and prisons.

According to a report by a local news portal canakkaledemokrat.com, the government began an investigation into a doctor who examined the jailed professor Hüseyin Özdemir, a cardiologist and former dean of the Medical School at Çanakkale 18 Mart University. Özdemir was arrested on July 23, 2016 along with six other academics including the university rector Sedat Laçiner on alleged coup charges.

They are accused of belonging to Gülen movement, branded by the government as terrorist group that is alleged to be behind the failed coup bid of July 15, 2016. Fethullah Gülen, a Turkish Muslim scholar who inspired the worldwide network of science schools, and interfaith dialogue institutions, strongly denied any role. Turkish government has so far failed to present any evidence linking Gülen to the coup but launched mass persecution against the group arresting close to 50,000 including journalists, doctors, teachers, military and police officers.

Both the intergovernmental and non-governmental organizations including the United Nations have issued reports confirming the torture and abuse in Turkey’s detention centers and prisons in the aftermath of the failed coup.

The Union of Public Hospitals, attached to the governor’s office in Çanakkale, adopted a decision to examine each and every medical report issued for jailed suspects who are charged for belonging to Gülen movement. These reports will be reexamined by a commission made up from experts, the web portal said.

Stockholm Center for Freedom (SCF) has received statement of concerns from lawyers and families of suspects in Çanakkale who have reacted to the probe, saying that they are worried about adverse impact the government investigation may lead to such as discouraging doctors from documenting health problems the suspects have been suffering in the jail.

In several reports SCF received showed that medical check-up, required by the law, for the suspects were done without even examining of the suspects or not including their statements in the report. In some cases, detainees were denied to access to emergency health care or their visits were postponed over alleged lack of staff to accompany them to hospital visits.

SCF document a case in February that showed how Turkish disregarded the health conditions of critically ill suspect who has been diagnosed with cancer and had to go through three surgeries, twice on brain and once lung. Yet he was put back to the prison in pre-trial detention after each surgery.

Yavuz Bölek, 49 year old decorated police officer who had been hailed as a hero for successful service in cracking down on terror cases before, has been left in terrible prison conditions while he needs medical care and close monitoring of his rapidly deteriorating health.

Bölek, veteran police officer who served for 25 years in various positions in Turkey’s main law enforcement agency, has received over hundred citations and awards in the police department for a distinguished service. Yet he was caught up with this witch hunt persecution like many others.

The Parliamentary Assembly of the Council of Europe in its resolution adopted in 2015 stressed the paramount importance of guaranteeing access to adequate healthcare to persons deprived of their liberty, the absence of which may result in violations of Articles 2 (right to life) and 3 (prohibition of inhuman or degrading treatment) of the European Convention on Human Rights (ECHR).

Turkey is a party to the ECHR and the Strasbourg court decisions are binding on Turkey. By denying or restricting to required medical care by suspects, Turkish government is risking a breach of its international obligations.

Moreover, the UN Committee of Economic, Cultural and Social Rights stated that access to health care is a key aspect of the right to health and states are under the obligation to respect this right by, inter alia, refraining from denying or limiting equal access for all persons, including prisoners or detainees, minorities, asylum seekers and illegal immigrants, to preventive, curative and palliative health services.