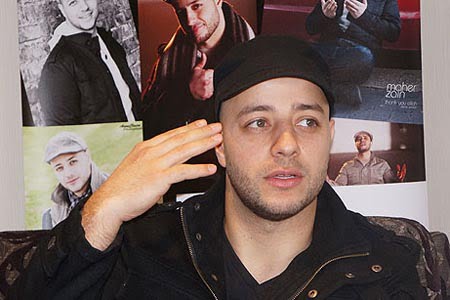 Lebanese-Swedish singer Maher Zain, who recently sang a poem written by Turkish Islamic scholar Fethullah Gulen for an album titled “Colors of Peace-Rise Up,” has said that he is very proud of singing a poem by Gulen.

Artists from 12 countries composed music for poems written by Turkish Islamic scholar Gulen, who is known for his global message of peace and inter-faith tolerance, for the album, which aims to promote peace and tolerance. The poems were translated into English and each artist selected one poem to interpret.

Zain, who sang the poem “The worldly life” on the album, visited İstanbul on Tuesday. Speaking to Today’s Zaman, Zain said that all of the poems composed for the album are very meaningful, adding that he is very happy to have taken part in such a well-intentioned project that promotes peace and tolerance in the world.

Noting that the music has been the best means to establish communication both in the past and the present, Zain further stated that music has an important role in conveying the message of peace in the Islamic religion to the world. “If everybody does their fair share of the work, peace can be established in the world. Within the scope of this intention, I am doing whatever I can. Music has the general effect of influencing the masses,” Zain noted.

Zain said that he has included four Turkish songs on his album “Forgive Me,” which has not been released yet, adding that he hopes listeners will enjoy his way of singing in Turkish. Stating that he admires Turkish music very much, Zain said: “I especially admire the voice of İbrahim Tatlıses [a Turkish singer]. Turkish music has a rich structure and it contains a special deepness and impressiveness inside. I also use Turkish instruments while composing my songs. I bought various learning DVDs in Turkish to learn Turkish. I hope I will have learned Turkish completely when I come to Turkey again in the future. I plan to visit Turkey frequently in the coming years. I will visit Turkey to be inspired by its music.”

Nil Production put together the “Colors of Peace-Rise Up” album over two years together with Universal Music. As part of the project, 50 poems by Gulen were translated into English and sent to the artists, with each artist picking a poem to turn into a song. As a result of this diversity, this world music album includes different genres such as pop, jazz, Indian sounds, Flamenco and Rai. The album is being marketed all over the world.

The project development manager of Nil Production, Tevfik Aslan, says that “Rise Up” has turned out to be a diverse and colorful album that calls for peace with its universal language at a time when wars are prevalent.

There seems to be some level of disconnection between the Hizmet and the other Muslim communities in the United States. It should be acknowledged that some volunteers or institutions of the Hizmet movement have already achieved a good level of cooperation with other Muslim communities in certain places; nevertheless, such good examples are only local and very limited.