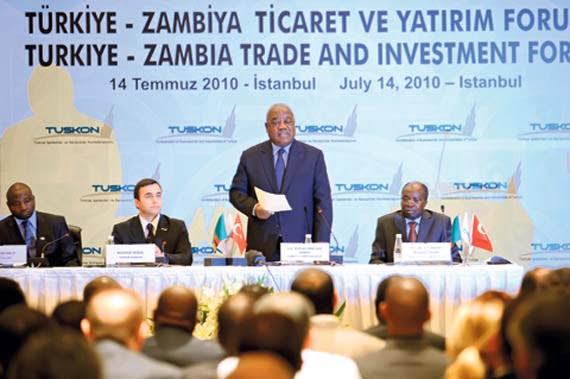 The southern African country of Zambia is expecting to attract a noticeable amount of Turkish investment following a business forum organized by the Turkish Confederation of Businessmen and Industrialists (TUSKON) in İstanbul on Wednesday.

Speaking at the opening of the Turkey-Zambia Trade and Investment Forum, Zambian President Rupiah Bwezani Banda invited Turkish businessmen to invest in his country to boost the bilateral trade volume between the two countries, describing the southern African country as “awash with all natural endowments that any industry needs.” The business forum brings together dozens of Turkish and Zambian businessmen with the goal of forging partnerships and enhancing economic integration between the two countries.

Accompanied by four ministers from the Zambian government and a group of businessmen, Banda arrived in Ankara for an official meeting with President Abdullah Gül on Monday.

Noting that TUSKON is a business community known for its success in Turkey, Banda said he believes further cooperation with the Turkish business world will help the Zambian economy recover. It was badly hit during last year’s global credit crunch.

Expressing his deep gratitude to Turkish businessmen who have invested in Zambia and who will be investing as a result of bilateral business meetings, Banda called on the businessmen to take the Zambian economy seriously and to consider investing in every area in the country.

Making mention of the opening of a Turkish college in Zambia, due to open in January 2011, in an exclusive interview with Today’s Zaman earlier on Tuesday, Banda said he will participate in the college’s opening ceremony, adding: “We are very grateful that Turkish entrepreneurs have come and opened a school in our country. It is our government’s number one priority to educate our people and it is a major achievement that the Turkish college will serve such a goal.”

Also sharing his views with Today’s Zaman, Zambian Minister of Finance and National Planning Situmbeko Musokotwane said he is very pleased to see countries which had been indifferent towards Africa for many years, such as Turkey, now taking the initiative to enter the continent’s markets. “Zambia could serve as an opening door to the entire African world for Turkish entrepreneurs,” he said.

Zambia has agreed to ease visa procedures for Turkish citizens and Turkey will soon open an embassy in the country. Also, Turkish Airlines (THY) said it will start direct flights to Zambia. “Our businessmen had the chance to establish contacts with their Turkish counterparts,” he said, adding that this will help increase mutual trade between the two countries in the near future.

While delivering the opening remarks, TUSKON Chairman Rızanur Meral said the business forum aims to contribute to mature bilateral trade relations with Zambia, and added that he hopes this event will lead to Turkish businessmen being able to invest in Zambia with ease. The TUSKON chairman said there are a myriad of opportunities in the construction, tourism, textile, food, retail and furniture sectors. Businessmen from both countries came together for a number of business meetings following the opening remarks.

Gulam Patel, a prominent investor in Zambia who owns several companies, told Today’s Zaman that many Third World countries see Turkey as a role model in terms of successful economic development. Noting that the Zambian government encourages foreign investment, he says many countries have investments in the country and that Turkey should join in to receive a share of the pie. “Zambia could import processed goods and defense equipment from Turkey,” he said.

A two-day international conference aimed at proposing a critical reflection for appraising the links between social cohesion and diversity in a globalized world has ended in Dakar, Senegal. The conference, which was organized by ATSA and Ebru Magazine in collaboration with the Institute Fondamental de l’Afique Noire (IFAN) and the Senegalese Ministry of Education, took   […]

Australian Relief Organisation has formed a trilateral alliance with Cambodian Government agencies, including the Ministry of Health and Ministry of Rural Development, and Mekong Charity to deliver healthcare projects in Cambodia.