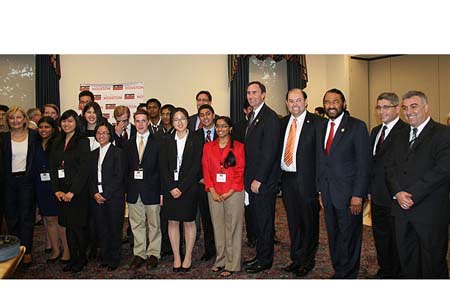 Student essay winners and US Representatives pose for a group photo on Wednesday night after the award ceremony at the House of Representatives' Rayburn House Office Building in Washington. (Photo: AA, Mehmet Toroğlu)

The University of Houston’s Gulen Institute on Wednesday bestowed awards on 30 young people for their winning essays on the subject of immigration and evacuation, in Washington, D.C.

Praising the Gulen Institute for its cultural and educational activities, Green said he has witnessed how the institute brings people together in Houston.

The first place prize of $3,000 went to George Abraham from the US state of Florida. Gawoon Shim from South Korea took second place, while Vaishnavi Rao of California received the third place award in the essay contest.

The congressmen in attendance awarded the 35 young students with certificates of recognition from Congress and congratulated them on behalf on their constituencies.

The winners were also given a three-day excursion in Washington. During this sponsored tour, students had the opportunity to visit various tourist attractions, meet with members of Congress and community leaders and participate in discussions.

Green, US representative for Texas’s 29th congressional district, praised the Gulen Institute for its role in strengthening Turkish and American relations during his speech at the awards ceremony, stating that the Gulen Institute helps people understand better Turkey-US relations.

Brooks, the US representative for Indiana’s 5th congressional district, said she was very pleased to attend the ceremony and added she took a pride in delivering an award on behalf of the Gulen Institute. Stating that the students studied hard to be able to succeed in the competition, Brook told the students that she was very impressed with their work.

Olson, US Representative for Texas’s 22nd congressional district, thanked the Gulen Institute for organizing such a competition during his speech in the ceremony.

Gulen Institute Chairman M. Sait Yavuz said they started holding the essay writing competition four years ago, adding that the students handle the problems in the world with purer and clearer intentions than the adults.

Established in October 2007, the Gulen Institute is a non-profit research organization dedicated to the promotion of peace and civic welfare.

“I always wear two watches on my both wrists. One of them is my watch and the other one is Gulen’s gift. When someone asks me about these watches I tell them that my watch shows Turkey’s time.”