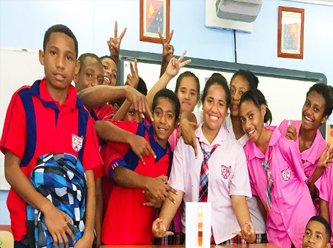 Students of Paradise High School, active in the country since 2007, took the first place in verbal, math, computer science and biology and third place in English, physics and chemistry sections of the national exam. Their achievement received recognition of the local officials besides the joy of schools officials and parents.

Speaking on their achievement, the school president Abdurrahman Aydin noted they had admitted these students earlier when they were not qualified for the public schools. They studied hard for the exams and ranked first in as little as two years. “In the Papua New Guinea educational system, some 100 thousand 8 graders annually take tests. 60 thousand of them qualify for the public schools with only 24 thousand able to pass the test at grade 10. Therefore, private schools like ours admit those unable to get into these public ones and get them ready for the university entrance exams in two years. Our parents and state officials alike expressed their appreciation for the achievement,” Aydin said.

Noting that success is hard to achieve under these circumstances, Aydin went on to say, “Our dedicated teachers and collaboration between students, school and parents played significant role in it.” He said they are the only school equipped with smart boards in the country. “Our teachers are in very close contact with students six days a week. We outperformed the others because of our intensive study pace, study camps and technology. Our parents were unable to hold back their tears seeing our performance.” Aydin also revealed that their project for a larger school in the capital Port Moresby is underway with the groundbreaking scheduled to very soon.

The top ranking students said they owe their success to their school and teachers. Among them, Pauline Kangu said, “Paradise High Schools, where I spent my past 4 years, allowed me to discover my capabilities. I ranked the 34th in the exams, which I owe to my teachers. We would never be able to achieve these results if it hadn’t been for our teachers who are always with us at school during weekdays and come to our homes at the weekends to follow up on us. Paradise School is a genuine school working for our future!”

A parent, Sam Boko said, “My best decision in my life was to enroll my son Moses in Paradise School. He unbelievably improved at this school. The study atmosphere and the school’s determined approach to my son changed him. The professionalism of the teachers, their methods and the way they encourage and motivate students are admirable. If parents want their children’s dreams to come true, they should send them to this school.”

The highly recognized school had won the country its first international medal at the 2012 International Informatics Olympiads in Romania.