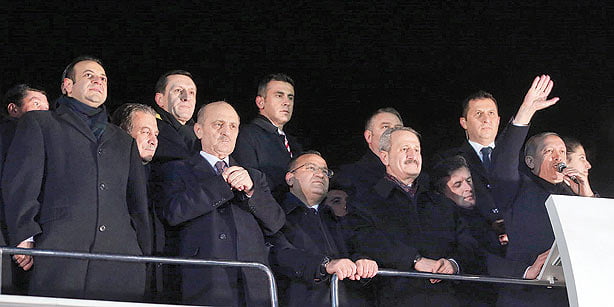 The Cabinet was shaken by the resignations of three ministers on Wednesday over a sweeping corruption and bribery investigation, with one of the ministers calling on Prime Minister Recep Tayyip Erdoğan to step down as well.

However, Environment and Urban Planning Minister Erdoğan Bayraktar, in a harsh statement, claimed that he had been pressured to submit his own resignation to save the prestige of the government, adding that the prime minister should also quit as most of the amendments on construction plans mentioned in the corruption investigation were made on Erdoğan’s orders.

The resignations came eight days after the launch of the investigation which resulted in the arrests of the sons of Çağlayan and Güler as well as over 20 other suspects, including Halkbank General Manager Süleyman Aslan and Iranian-Azerbaijani businessman Reza Zarrab.

In a written statement, Güler defined the corruption investigation as a “dirty set-up” against the Justice and Development Party (AK Party), its government and Turkey and said he decided to resign in order to help the truth come out and to foil this ugly set-up, which has impacted his son. Güler also said he verbally tendered his resignation to the prime minister on Dec. 17, when his son was detained as part of the corruption investigation. “Today I have presented it in writing,” he added.

Güler was appointed the interior minister in January. Previously, he served as the governor of İstanbul for seven years.

Çağlayan issued a statement almost identical to that of Güler. He also called the corruption probe an ugly plot and said his resignation was aimed at foiling a game which has impacted his son and close colleagues, among others.

Bayraktar announced his resignation in the afternoon during a televised program on NTV. He said he decided to quit both as a minister and as a deputy. In addition, he said he was forced to undersign a “declaration of resignation” which was aimed at “relieving the prime minister and his government.” “The prime minister has the right to work with any minister he chooses or remove from duty any minister he does not want to work with. But I do not accept pressure put on me to resign due to the corruption and bribery operation and issue a declaration that will relieve the prime minister,” Bayraktar said.

He also added that a “majority of the construction plans” that are mentioned as unlawful in the corruption investigation were approved upon the orders of the prime minister. “I believe that the prime minister should step down as well in order to relieve the Turkish public.”

The son of Environment and Urban Planning Minister Bayraktar was detained as part of the corruption investigation but was later released pending trial. In addition, there are claims that EU Affairs Minister Egemen Bağış had taken bribes as well.

In Turkey, when a deputy resigns from duty, his petition is initially submitted to the presidency of Parliament, which is later sent to the Presidency Council of Parliament. The presidency has one week to examine the resignation petition before forwarding the petition to the General Assembly for voting. The deputy loses his status if a majority of his colleagues votes in the affirmative.

The ministers’ resignations came at a time when the government is considering a Cabinet reshuffle. Government officials had previously said the reshuffle would occur toward the end of December. There were claims that the prime minister would change the economy and interior ministers along with several others. There were speculations that the prime minister may submit a list of new members of the Cabinet to President Abdullah Gül on Wednesday.

In response, Prime Minister Erdoğan spoke at the AK Party’s expanded provincial chairmen meeting and called the corruption operation an “international plot” supported by some collaborators within the country that aims to sow discord in Turkey. In several explicit references to the Hizmet movement, inspired by Turkish Islamic scholar Fethullah Gülen, the prime minister claimed that the operation was orchestrated by “gangs” and a “parallel state.” He also said the operation has cost Turkey some $20 billion.

In addition, Erdoğan criticized the definition of the operation as a corruption and bribery operation, which he said is aimed at discrediting some “people already proven to be clean.” “If there is a flaw in the legal system, we will fight against it within the area of our authority. We are a political party that acts with principles,” he said, adding, “We will get rid of the rotten ones,” in a veiled reference to AK Party members who are involved in corruption and bribery.

On Tuesday night, Prime Minister Erdoğan displayed a picture of solidarity with his ministers by standing next to them and holding their arms up during a speech he delivered at Ankara Esenboğa Airport following his return to Turkey from Pakistan. Addressing hundreds of people, the prime minister redefined the investigation as an attack on his government. However, this time, he also displayed a change in his tone, signaling that his government will take a different approach against the ministers who are accused of bribery in the days to come. “Those who are involved in corruption will be held accountable by the people and the law,” the prime minister said.

The prime minister later met with four ministers, including Çağlayan and Güler, at his Ankara home. The meeting lasted over two hours. No details were immediately available about the contents of the meeting.

The ministers’ resignations drew immediate comments from the ruling party.

Also on Tuesday, while speaking to the press, Güler said his son’s arrest is not lawful as he had not been charged with a “catalog crime,” a term that refers to crimes during whose investigation special security measures could be applied. “My son has not been arrested for an organized crime. He is only arrested on charges of brokering a bribe. According to a decision taken by the general assembly of the Supreme Court of Appeals, there are no legal grounds for his arrest. This is because the person [accused of brokering] has to be a public official. I am the public official [not my son],” Güler said, adding that any unofficial wiretapped telephone conversation of his is not legal evidence, referring to a wiretapped conversation with his son that went viral after the corruption investigation started last week.

AK Party İzmir deputy Ertuğrul Günay said the ministers made the “correct but belated decision.” He also said the other ministers who are allegedly involved in corruption and bribery should also resign. The party’s Gaziantep deputy, Şamil Tayyar, however, criticized the resignations. He said the ministers resigned even though there was no indictment charging the ministers. According to Tayyar, the corruption investigation was aimed at creating a conflict between the prime minister and the president and weakening the AK Party as a result.

In the meantime, Republican People’s Party (CHP) Deputy Chairman Sezgin Tanrıkulu submitted a question to Parliament on Wednesday, asking Parliament to inspect all public tenders held between 2003 and 2012 to see if any corruption or fraud took place in those tenders.

In his question, Tanrıkulu said a parliamentary commission should be established to carry out the inquiry.

According to Tanrıkulu, the state paid TL 5.6 billion for all public purchases in 2003, but this figure rose to TL 94.3 billion in 2012, causing concerns that public tenders were marred by corruption after 2003 which led the state to suffer a huge financial loss. The CHP deputy chairman also pointed out that while Parliament had received 252 complaints from citizens about public tenders in 2003, the number of complaints jumped to 5,282 in 2012.

Former Interior Minister İdris Naim Şahin resigned from the ruling AK Party hours after the resignation of three ministers from their posts.

Ordu deputy Şahin had disagreements with the ruling party over a number of issues and the recent corruption scandal prompted his exit from the party, which was shaken by a series of resignations.

What has happened since the launch of the graft investigation?

· Some police officers who were involved in the corruption and bribery investigation were removed from their duty on the first day of the probe. In other words, the interior minister sacked the officers who contributed to the arrest of his son.

· An entire operation against the police force across Turkey then followed. A total of 135 police officers serving in police departments in various provinces who had been ordered by the prosecutor’s office to conduct the investigation were sacked.

· The confidentiality of the corruption investigation received a huge blow when the government made an amendment that requires police officers to inform their chiefs about details of ongoing investigations. With this amendment, no investigation will be carried out without the knowledge of the executive.

· Claims emerged that Justice Minister Sadullah Ergin held two secret meetings with İstanbul Chief Public Prosecutor Turan Çolakkadı. These claims have not been denied. The meetings led to comments that the minister was working to impede the investigation by attempting to influence the opinion of the chief prosecutor.

· More police officers involved in the corruption operation were removed from duty. Their number exceeds 400.