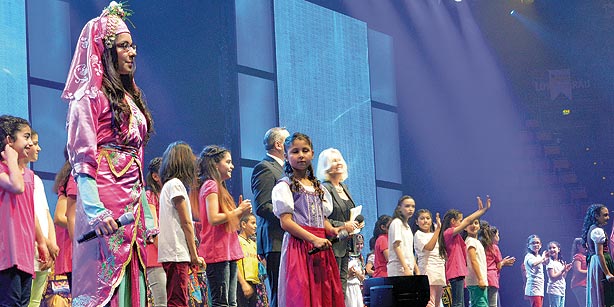 Students learning Turkish, and who wish to compete in the annual Turkish Language Olympiad held in Turkey, first compete in their home country. The three most recent countries to hold the events to select finalists were Germany, Moldova and Uganda.

Germany held its German-Turkish Cultural Olympiad for the fourth time at the Olimpiahalle venue in the Munich Olympiapark under the auspices of the Bavarian State Ministry of Education, Science and the Arts. About 10,000 people were in the audience to watch the songs and dances of the contestants.

On Saturday, an award ceremony was held for the students who won in their respective categories in the Olympiad. Several members of the European Parliament attended the event, including İsmail Ertuğ from the Social Democratic Party (SPD), and federal German deputies such as Florian Post (SPD), Doris Wagner (Greens) and the head of the Munich Police Force Hubert Steiger, as well as state politicians.

Famous television hosts Sabine Christiansen and Ali Bulut chaired the event. In her opening speech performed at the ceremony, education expert Nilüfer Pekince said that the German-Turkish Culture Olympiads promote a culture of living together.

Participants who won the first place in the categories of poetry and singing in German and Turkish received their awards at the event.

Elefterios Vassiliadis from Stuttgart, who sang the song Anadolu Benim (I am Anatolia), won the Turkish song category. Anna Marie Tschaban from Duren won second place while Loa Burmester from Berlin came third. In the category of Turkish poetry, Vivian Brand Sassen from the town of Geseke came in first place, Lura Heising from Solingen was second and Timoti Königshoven from Geseke came third.

Historian Manfred Treml said that the culture of living together could be seen in the hall during the event. “You could feel unity and togetherness among both German and Turkish guests,” he said.

In Moldova, the event was called the Language and Culture Festival. It was organized by the Moldovan Orizont High School in the Philharmonic Hall in Chișinău. Politicians, businessmen, bureaucrats, artists and parents of school students attended the event, as well as Mehmet Selim Kartal, the Turkish ambassador to Moldova, in spite of a call from Foreign Minister Ahmet Davutoğlu not to attend events associated with the language olympiads in mid-March.

Deputy General Manager of Orizont Educational Institutions Hasan Karacaoğlu, who made the opening speech, said his organization’s schools were striving to mold students who can contribute to dialogue between different cultures. Leonid Bujor, an education advisor to the prime minister of Moldova, thanked the school and its faculty for their contribution to Moldova’s educational life. 12 students will be representing Moldova this year in the 12th Turkish Olympiads.

Turkish schools in Uganda also organized a language festival to decide who will come to Turkey to compete in this year’s olympiad. Details of the event in Uganda were not immediately available. The Turkish festival in France was scheduled for Sunday night.