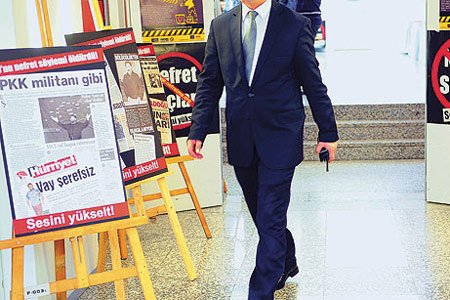 Several hate crimes have been committed in Turkey as a result of the publication of news items and columns using hateful discourse, some of which were displayed at a conference on hate speech last year. (PHOTO CİHAN, Mehmet Yatkın)

Some 60 civil society groups have come together in a campaign to demand legislation to deal with hate crimes in Turkey. Although such crimes have reached unprecedented levels, with numerous incidents of murders and assaults motivated by prejudice and hostility toward an individual or a group, they commonly go unpunished. The campaign to introduce hate crimes legislation was kicked off at a press conference in İstanbul on Jan. 26, where Levent Şensever, secretary-general of the Association for Social Change (ASC), said the campaign has two goals: first, to bring a draft law to Parliament and second, to raise public awareness about hate crimes.

Civil society groups and individuals that demand hate crimes legislation in Turkey have created a platform for discussion on the website nefretme.net (“Do not hate”), which has received almost 5,000 signatures in support of the campaign. The Hate Crime Legislation Campaign Platform has also organized a series of meetings at which academics and civil society activists deliver talks on hate crimes and hate speech.

Lawyers from the platform are currently working on draft legislation that aims to define and criminalize hate crimes. Speaking to Sunday’s Zaman, Cengiz Alğan, the chairperson of the steering committee of the ASC, said during this drafting process the platform has been in consultation with the US-based Anti-Defamation League (ADL) and the Organization for Security and Cooperation in Europe (OSCE), the world’s largest security organization, which addresses a wide range of security-related concerns including human rights, minorities and democratization.

“When we are finished with the draft legislation, we will send it to the OSCE to be reviewed before we submit it to Parliament,” Alğan said, adding that the bill will probably be submitted to Parliament by the end of October 2012.

Hate speech is a form of expression that spreads and promotes hatred based on intolerance and animosity towards individuals or groups. Hate speech not only inflicts psychological damage on the victim but also tends to incite hate crime, which can be defined as a criminal offense motivated by prejudice or hostility based on somebody’s ethnicity, national identity, religious beliefs, social status, sexual orientation or disability.

This kind of crime may vary from harassment, intimidation or damage to possessions and property to actual acts of physical violence, such as physical assault, rape, torture or murder.

The Hate Crime Legislation Campaign Platform website defines hate crimes as “message crimes,” which reach beyond the victim and make the victim’s group feel they are unwelcome in the community. This message carries with it psychological consequences, such as fear, depression and anxiety. The platform says that as a result of this message the members of the group can feel marginalized, suffer from psychological trauma and may even commit suicide. Turkish-Armenian journalist Hrant Dink, who was fatally shot in front of the headquarters of the bilingual Armenian weekly Agos in 2007, was one of the most publicized victims of hate crime in Turkey, as he was killed because of his “Armenian” identity. According to court documents, Ogün Samast, Dink’s murderer, did not even know Dink’s proper name. He just knew that he was an Armenian.

The murder of Father Andrea Santoro, who was killed in 2006 by a 16-year-old ultranationalist at his church in Trabzon, the Malatya Zirve Publishing House murders of 2007 in which three people who sold Christian literature were brutally killed and violence targeting a Roma community in 2010 are all examples of hate crimes according to the Hate Crime Legislation Campaign Platform’s website.

As there is currently no legislation on hate crimes in Turkish law, criminal cases issues are often left unsolved and criminals generally go unpunished. Commenting on Article 216 of the current Turkish Penal Code (TCK), which criminalizes “inciting people to hatred and enmity,” Professor Yasemin İnceoğlu, a platform member, said in an interview with Sunday’s Zaman that the article in question covers hate speech rather than hate crime and could even be described as falling short of criminalizing hate speech, as it is not usually used by prosecutors in support of minority groups.

“We, as platform members, have interviewed numerous deputies and nongovernmental organizations in the scope of the campaign,” İnceoğlu said, adding that Turkey urgently needs legislation against hate crimes.

Among the civil society groups that support the hate crime legislation campaign are many LGBT (Lesbian, gay, bisexual and transgender) organizations, religious groups and associations for the disabled. Some of the more prominent organizations that are working against hate crime and actively involved in the campaign are the International Hrant Dink Foundation, the ASC, the Human Rights Agenda Association (HRAA) and the Say Stop to Racism and Nationalism (Dur De!) Initiative. The aforementioned organizations fight against hate speech and hate crime by publishing regular reports analyzing current trends across Turkey.

The International Hrant Dink Foundation recently released a report that reviewed news items and columns marked as using hate speech and fuelling animosity which were published in the national and local press during the four-month period between September and December 2011. The foundation releases such a report every four months on nefretsoylemi.org (“Hate speech”) — a project it has launched “to combat racism and discrimination based on ethnic and religious grounds, through monitoring the newspapers and exposing ‘problematic’ articles in the media.”

The reports include information on groups that have been targets of hate speech as well as the methods used in the construction of hate speech, such as defamation, exaggeration and stereotyping. The latest report indicates that the target groups have become more diversified in comparison to previous periods studied. While earlier reports revealed that the most targeted groups were Armenians, Kurds, Jews and Greeks, the most recent report described hate speech observed in news items and columns against Laz, Georgian, Albanian, Arab and Zarathustra communities.

In 2010, the ASC conducted a similar project under the title “Hate Crimes in the National Press: 10 Years, 10 Examples.” Starting in 2008, the team behind the project scanned 20 national newspapers that made up 80 percent of newspaper circulation in the country. They came up with 30,000 news items that could be marked as inciting hatred and fuelling hostility in society. They created an initial shortlist of 5,000 news pieces and subsequently whittled this down to 200. They published 10 examples of the final shortlist in their report.

Alğan told Sunday’s Zaman their media review project indicates that hate crimes are mostly motivated by hostility against an individual’s or group’s ethnicity.

Asked if their analyses have also revealed news items that contained hate speech directed at the Hizmet movement — a group of volunteers engaged in interfaith and intercultural dialogue inspired by the ideas of Fethullah Gülen, whose teachings promote mutual understanding and tolerance between cultures — he said they find such items as well and categorize those under Islamaphobic discourse.

*** We publish this news here because it gives an answer to the questions “Why do some people hate Gulen and Hizmet/Gulen movement in Turkey?”

As evidenced by the findings I briefly described, there is a great contradiction. Those who criticize Gülen argue that he is a pro-Shariah Muslim, but he is also a hidden cardinal, extreme nationalist or an agent at the same time.