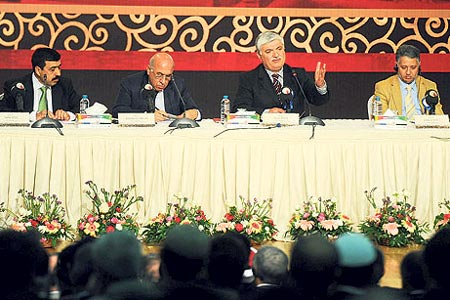 Prominent religious scholars from 60 countries discussed possible ways, by a close examination of Prophet Muhammad’s methods, to find solutions to today’s problems during a two-day symposium in Gaziantep over the weekend. (Photo: Today's Zaman)

“During my visit to Turkey, I met with many people who are inspired by Gülen. I noticed educational institutions that are doing great things across the world and making efforts in the medical field. What the Gülen movement have been doing across the world is great and indefinable,” Maulana Wahiduddin Khan said.

Amid the increasing social and political problems faced by Muslim societies in a modern world, religious scholars from 60 countries called on Muslims to revisit the Prophet Muhammad’s handling of social issues, at a symposium titled “Solutions to social problems from the Path of the Prophet [Muhammad],” held by Yeni Ümit and Hira magazine over the weekend in the southern province of Gaziantep. Nearly 1,200 religious scholars, opinion leaders and academic from more than 60 counties attended the symposium.

A symposium with the same title was held in 2010 in Istanbul.

Prominent religious scholars and opinion leaders from 60 countries discussed possible ways, by a close examination of Prophet Muhammad’s methods and mentality, to grapple with the current political and social crises that have shattered Muslim states and severely tested the stability and social peace among different Muslim groups.

Görmez said Muslims need to rethink along the path of Prophet and his “sunnah” (anything the Prophet said, did or approved of) to find relevant solutions to problems that Muslims have to deal with.

Görmez underlined that the Prophet’s sunnah paves the way for a unity in thought, feeling and praying among Muslims in the Islamic world regardless of where they live. According to him, the Sunnah is the common ground for all Muslims and defies the difference in race, color, skin and geography.

He argued the most lamentable problem that Muslims face today is the inability to compromise the Prophet’s models and thoughts to the conditions of the modern age in order to solve the social issues and problems that seriously threaten social peace in Muslim societies.

The issue of racism and sectarian divide was one of the topics that was touched on in the symposium. Turkey’s deputy prime minister lamented the fact the most severest problem of the Muslim world is racism, which has created social squabbles among Muslim communities and many people have died as result of this sectarian strife.

Bozdağ recalled that the sectarian divide has caused great pain and many undesirable events across the Muslim world in the past. He urged Islamic scholars to a play more effective role in the prevention of sectarianism and racism in the Muslim world to avert the possibility of further clashes between communities and to preserve peace.

Gülen movement resembles way of Prophet and his companions

On the second day of “Solutions to social problems from the Path of the Prophet,” a wide range of Muslim academics discussed the role of Islamic teachings in contemporary politics and society.

Meanwhile, keynote speaker Prof. Dr. Abdunnasır Ebu’l Basal expressed his belief in Islam’s power to promote fellowship among people of different nations and faiths, stating, “In Muslim societies, those who are proud of their roots or nationality over Islam, this has nothing to do with religion. To God, all are brothers in faith.”

Prof. Halil Nahvi of Mauritania meanwhile stated that the fellowship he wanted to see between Islamic communities and between Islam and other faiths was being accomplished through the efforts of Islamic scholar Fetullah Gülen. “You’re doing important services with the conferences, schools and primary schools you’ve opened across the globe,” Nahvi said. He added that Gülen’s teachings ought to be looked at as an important model for inter- and intra-faith dialogue.

Speaking during the symposium, Maulana Wahiduddin Khan argued that Gülen has become a source of inspiration for millions of people. Khan said Fethullah Gülen has realized what the requirements of the modern age are and raised a new generation of Muslims who have common characteristics of the sahabe (companions of Prophet Muhammad).

“Turks have been doing what sahabe did in the seventh century. I saw what they did across the world and became happy,” he said as he expressed his optimism and hopes for the future.

“The most important mission [for Muslims] is to rediscover the significance of the Holy Quran. Mr. Gülen began his movement with the guidance of the Quran,” he said.

“During my visit to Turkey, I met with many people who are inspired by him [Gülen]. I noticed educational institutions that are doing great things across the world and making efforts in the medical field. What they [the Gülen movement] have been doing across the world is great and indefinable,” Khan added. Nearly 1,200 religious scholars, opinion leaders and academic from more than 60 counties attended the symposium.

ŞAHİN ALPAY Many studies concerning Fethullah Gulen, the Turkish religious leader scholar and his movement have been published. The book published by Syracuse University in the United States last month is, however, the most important academic study so far. The book entitled “Turkish Islam and the Secular State: The Gulen Movement” is edited by John […]