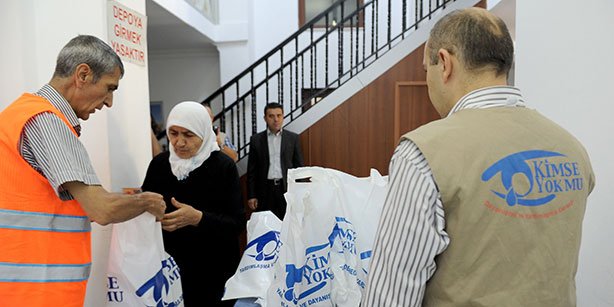 Madrasa students at a school in Ghana that the charity aided last year drew pictures to thank the charity when Kimse Yok Mu returned this year. A teacher at the school named Suleyman gave the pictures by the students to the charity as a thank-you present and explained how the students were waiting for it to come this year. “You have come again this year, just as you did last year. God bless the Turkish people who have sent aid,” he said.

With its volunteers, the charity visited the families of fallen soldiers and police officers who have lost their lives since the breakdown in the cease-fire with the terrorist Kurdistan Workers’ Party (PKK). On the eve of the holiday and throughout the three-day observance, charity members prayed with families and donated sacrificial rams.

When retired football player Hakan Şükür heard of the charity’s visits to grief-stricken families, he donated a second sacrificial animal in addition to the initial one he donated. Şükür posted his support for the charity on his Twitter account, saying that Kimse Yok Mu will be aiding the families of killed soldiers. Furthermore, the charity sent aid to Syrian refugees in the Turkish border city of Kilis.

Kimse Yok Mu, which is inspired by the teachings of Turkish Islamic scholar Fethullah Gülen, has come under intense pressure from the Justice and Development Party (AK Party) government in the last two years, with investigations being carried out against its supporters. The smear campaign against the charity organization is an example of the AK Party’s general animosity towards the Gülen movement, also known as the Hizmet movement. Gülen has inspired millions of people worldwide with his work for global peace through education, social work and dialogue.

President Recep Tayyip Erdoğan has accused the movement of instigating the infamous corruption probes revealed on Dec. 17 and Dec. 25, 2013, implicating government ministers and some of Erdoğan’s family members.