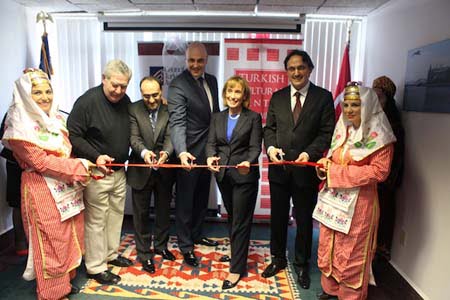 Turkish Cultural Center New Hampshire opened it doors at a ceremony held in Manchester on Saturday with the participation of Governor Maggie Hassan, many state politicians, and businessmen.

“With today’s ribbon cutting, it is easy to see the positive impact that Turkish Cultural Center has already made in the Manchester community and I am confident that we will continue to see great things from the Center in the future, the Center supports multiculturalism and is dedicated to establishing good relations between the American and Turkish communities in Manchester” said Governor Maggie Hassan. After the speech, Governor Hassan presented a Proclamation document for Turkish Cultural Center to CTAA President Furkan Kosar and TCCNH President Eyup Sener.

Also Speaking at event CTAA President Furkan Kosar speaking to the Irish Americans in ceremony gave and interesting fact about Ireland stated: “During Great Famine in Ireland around 1845, Ottoman Empire Sultan Abdul Majid gave $1,000 starling and also sent three ships food supplies, Sultan Abdul Majid actually wanted to give 10,000 but since Queen Victoria gave only $2,000, they only received $1,000.” Mr. Kosar, also stated: ” We are very happy to be here in this new centers opening as it becomes the 45 member of the Council of Turkic American Associations, which is the biggest Turkic American organization in the northeastern region,”

21 November 2011, Monday / ALİ H. ASLAN, WASHINGTON The White House, on its official website, commended the Washington-based Rumi Forum, an international organization promoting interfaith dialogue and peace, for its work in fostering “inter-religious and intercultural understanding” in a “consistent” manner since its establishment in 1999. The White House Office of Faith-based and Neighborhood […]