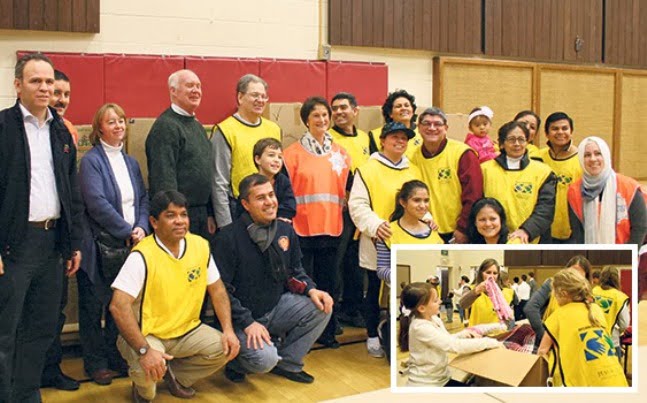 American Turkish Friendship Association (ATFA), active in Washington, D.C. had earlier taken a group of the U.S. mayors to Turkey for a study and intercultural trip, in late October. The local leaders from Northern Virginia, populated by 2.5 million, were moved by the gut-wrenching scenes in the Adana refugee camp so much so that they immediately rolled up the sleeves upon their arrival back in the country. They mobilized their offices to make it a large-scale campaign that would achieve over 10 thousand blankets along with 10 thousand dollar of monetary donation. Mark Gibb of Northern Virginia Regional Commission explained the motive: “We met a Syrian, who had been a police officer for 17 years, living in a cramped room. We asked how we can help him. And he replied: “Just send some blankets, it’s getting colder.””

Numerous NGOs representing a wide range of social communities contributed to the campaign under the leadership of Fairfax, Loudoun, and Purcellville mayoral offices. Districts’ federal and state officials were as well informed on and gave their support to the campaign. The local Turkish-run institutions mobilized a large number of volunteers. The campaign gained huge publicity through flyers and news on local media. The donations have been stored at facilities of state offices, schools and places of worship.

Mayor of Fairfax -home to one of the most prosperous and educated population of the nation-Sharon Bulavo, had earlier encouraged his locals to donate via a message on the office’s official website, on November 19. The office is bursting at the seams due to donations, he reported. Bulavo the other day was in Latter-Day Saints Church, one of the facilities used to pack the donations. He put on a Hizmet Relief vest and joined the campaign volunteers. Loudoun Mayor, Scott York, alike sweated over at the embarking facility in Sterling. He personally packed the shipping and loaded it to the truck.

Another initiator of the campaign is Purcellville Mayor, Robert Lazaro. In his address to the Turkish and American volunteers joining their hands at the facility, Lazaro referred to their visit to the refugees in Adana camp as the most humbling experience of his life. He further hailed the Turkish government’s and people’s aid efforts.

The New Jersey-based Hizmet Relief, in cooperation with Kimse Yok Mu Foundation, took the lead in the campaign. The foundation’s website has been used to receive monetary donations. The overall donations will be delivered to Norfolk port by Paxton Company at no charge. Sean Connaughton, Secretary of Transportation of Virginia, who had attended the ATFA’s trip, is also contributing to transportation. The world-famous Maersk is sponsoring the shipment to Mersin port. The mayors intend to greet the shipping to depart from the US on December 18, at Mersin port and personally deliver it to those in need. Kimse Yok Mu is in charge of the final transportation phase. Adana businessmen as well are reported to be involved in the delivery.

In addition to Adana, the American delegation including Coles Mayor, Martin Nohe; and Alexandria Mayor, William Euille as well had been to Istanbul, Izmir, Ankara and Cappadocia and met with their counterparts. The visitors were impressed by the hospitality, food, natural attractions and historical sites; President of Mid-Atlantic Federation of Turkic American Associations (MAFTAA), Mahmut Yeter, and Pinnacle Academy Principal, Mustafa Akpinar, both reported. Yet, the most striking and touching part was in Adana, Yeter said.

Turkish charities have taken the opportunity to extend a helping hand to those in need both across the country and around the world during Eid al-Adha, an Islamic holiday celebrated by millions around the globe, delivering various relief items, including sacrificial meat, to put a smile on people’s faces during this joyous time. Eid al-Adha […]