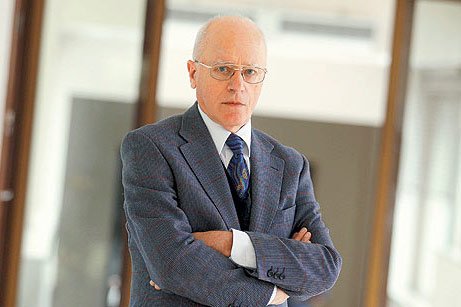 Professor Hans Köchler from Austria, the president of the International Progress Organization (IPO), has said the European Union’s resistance to Turkey’s membership is not due to its identity or its Islamic culture, as some argue, but mainly for economic reasons.

The Abant Platform organized by the Journalists and Writers’ Foundation (GYV) hosted a wide range of participants from different walks of life at the traditional Abant meetings to discuss the “Diverse Perspectives on Turkey” on Feb. 8-10. Today’s Zaman talked to one of the most prominent participants of the meeting, Professor Köchler from Austria, the president of the IPO, a Vienna-based think tank that aims to promote dialogue among civilizations, the peaceful coexistence of nations as well as human rights. Köchler had been nominated as an observer at the Pan Am Flight 103 (Lockerbie) bombing trial by the then UN Secretary-General Kofi Annan.

European countries have a dishonest and tactical attitude towards Turkey

As far as Turkish-EU relations are concerned, Köchler describes the European attitude as dishonest and tactical as he says that Turkey’s disappointment is understandable. Giving the example of the stance of his native Austria, Köchler says that announcing that the negotiations are open-ended means the rejection of Turkey’s membership since “according to repetitive opinion polls, the [Austrian] people are overwhelmingly against Turkey’s membership.” Directing attention to the double-standard, he states that “the [Austrian] government’s official position is to take the issue to referendum, but it was not done for any other country. It is not required in the Austrian constitution.”

Given the requirement for unanimity in the EU’s decisions for any decision-making process, for Köchler the hopes for Turkey are dimmer especially when coupled with the “games that the European countries are playing in Turkey’s negotiation process due to domestic political concerns.” In such circumstances, Köchler recommends that Turkey not be “provoked by the others and continue the negotiation process steadily.” For him, “political fluctuations in the EU countries should not affect Turkey’s principled political stance.” However, he also warns the Turkish government to avoid “conveying the message to its public that membership is guaranteed” to avoid “disillusionment.”

Despite the gloomy picture regarding the prospect of Turkey’s membership, for Köchler Turkey has a lot to offer Europe “not only economically, but in terms of the architecture of security in Eurasia” as we are actually talking about a single geopolitical area. According to him, “what Turkey’s location offers is a possibility to deal with the dramatic transformation in the Middle East and North Africa in a more organized manner.” He argues that such an involvement would not necessarily bring instability to Europe. “For Europe, the problems in the region exist anyway. If Turkey is part of the EU it could more directly react to the evolving situation,” says Köchler.

According to Köchler, the resistance to Turkey’s membership is not due to its identity or its Islamic culture, as some argue, but mainly for economic reasons. “One of the main worries in Europe is that there would be competition in the labor market, which is not a pleasant thing for the pampered European workers,” says Köchler as he adds that “this is the situation in Austria. The average laborer in Austria is not at ease with this. Because of the economic crisis, people are already feeling threatened as far as their living standards are concerned.”

Köchler argues that “Islam is only a pretext in Europe because the [Christian] faith is in a decline, not a living reality among the vast majority.” He further says that for the vast majority of Europe, Christianity serves only during baptisms, wedding and funeral ceremonies. However, “Islam is being brought up as a kind of ideological card” by political leaders, most of whom do not practice Christianity except for public relations, Köchler claims.

Islam built up as new enemy of West

Köchler calls dialogue among civilizations “one of the most important issues of global affairs.” As president of the IPO, Köchler says that “for me the situation is interesting because back in 1972 we established an international NGO and I wrote UNESCO a suggestion to study dialogue among civilizations.” Underlining the novelty of such a suggestion during the Cold War era — a time that signified an ideological rivalry — Köchler says that with the collapse of the Socialist bloc, “the enemy stereotype has disappeared and a new enemy was gradually built up.” According to him, in the framework of this “power politics,” the new enemy is Islam.

Criticizing the media for “conveying the message that the Islamic civilization is based on totally different values, understanding of freedom and family structure,” Köchler argues that Islam is portrayed as a threat to the security and identity of Europeans.

On the other hand, Köchler also raises the issue of the increasing number of Muslim immigrants in countries like Austria, Germany and France, “which is changing the demographic composition of European societies.” According to him, Europe currently handles this issue in a “populist manner.” Criticizing the European politicians for using Islam and exploiting the emotions of the people for political gain, Köchler calls this trend dangerous. “In a democracy, no political competitor should create stereotypes for political gain,” he adds while referring to the remarks of former French President Nicolas Sarkozy, German Chancellor Angela Merkel and British Prime Minister David Cameron “publicly announcing the failure of multiculturalism.”

In reference to the Abant meetings, Köchler says that “it is a unique initiative. When I came here I thought it was the Turkish Davos.” According to him, “intellectuals, opinion leaders, people from different walks of life from different countries meet in an atmosphere of a free exchange of views where there is no steering of opinions in any direction. The diversity of Turkey is represented.” For Köchler, such an initiative is important for international dialogue because it comes from this very region. He believes that the Abant meetings are “more serious than what we see in Davos because there people speak in their official capacity, not in an open debate.”

Hans Köchler says he is familiar with the works of Islamic scholar Fethullah Gülen, who inspired the Hizmet movement, which is predominantly known for its global education initiatives. “I have attended quite a number of conferences in different parts of the world sponsored by the movement founded by him,” says Köchler. He adds that “my perception is that he has an enlightened — and I would even say as a philosophy professor — philosophical view of Islam that applies the message of the religion and the absolute truth to the circumstances of our time.” According to Köchler, Gülen is able to convince people that Islam is an integral part of our global order.

In reference to inter-faith dialogue, Köchler says, “I am also aware of the dialogue initiative that Mr. Gülen supported in the field of interreligious cooperation and of the meetings he attended with the pope.” Sharing his full support for Gülen’s “commitment to peace and open discussion,” Köchler hopes that this “interpretation of Islam will gain influence over narrow-minded and sectarian interpretations.”

Köchler, who visited a school established by people inspired by Gülen in the southeastern province of Mardin, says he met Turkish, Kurdish and Arab students during his visit. “The educational work Fethullah Gülen is promoting is really of utmost importance,” says Köchler who also notes appreciation for the cultural work of the movement. “The Turkish Language Olympiad is much better than the Eurovision song contest in terms of cultural quality,” concludes Köchler.