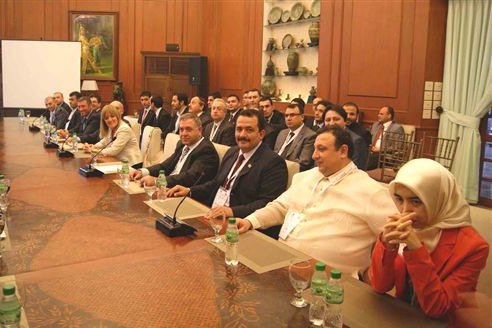 TUSKON, Confederation of Businessmen and Industrialists of Turkey, opens new trade doors with Turkish-Filipino Business Forum in the capital Manila. A delegation of TUSKON businesspeople organized a business trip to the Philippines on January 26-30. As a part of their agenda, the delegation met with the Vice President of Philippines Jejomar Binay at the presidential residence.

In addition to the official interactions, a Turkish-Filipino Business Forum was held to initiate long-term business networks. The forum saw an attendance of approximately 70 Turkish and 300 Filipino investors. Hatice Pinar Isik, Turkish Ambassador to the Philippines, gave a presentation on economic infrastructure and opportunities in Turkey encouraging the investors to broad their horizons and globalize.

The Turkish businesspeople and Filipinos, alike, expressed their enthusiasm about long-term, prospective partnerships in their remarks. The consensus was that the Philippines, with a population of 100 million, is a young, energetic and consumption-oriented country as is Turkey.

Within the forum’s objectives, a goodwill agreement was signed by the Filipino Chamber of Industry and Trade with TUSKON. The Filipino investors seeking profit-sharing business debuted a 6-billion dollar project which covers a vast range of sectors including motorway construction, infrastructure, and school buildings and is open to foreign investors. According to the host businessmen, foreign investors are sought for the housing project, in particular, targeting the low-income people.

Tourism to be the fastest-growing Turkish-Filipino business

Selim Sunay, the president of Istanbul-based Nuans Tourism, noted that tourism is most likely to be the fastest- growing sector that Turkish and Filipino businessmen can partner in. He stated that they had initial meetings with 10 companies and are about to launch Turkey holiday packages for Filipino customers. According to Demir, the number of Filipino tourists having visited Turkey last year was around 60 thousand representing an 18% increase compared to the previous year.

Source: [in Turkish] on F5haber.com, 29 January 2013, Tuesday. English translation is retrieved from Hizmetmovement.COM