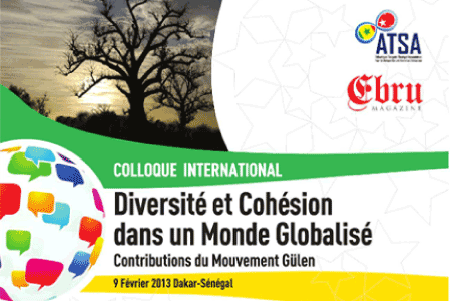 As the faith-based Hizmet movement widens its activities around the globe in areas such as fostering education and launching humanitarian efforts to heal social and economic woes in different regions, academic research on the motives and nature of the movement is also surging, and a conference is set to take place in the West African country of Senegal.

Ebru Magazine, a French-language offshoot of Turkey’s high-circulation monthly magazine Sızıntı, is organizing the conference this week in Dakar, Senegal, one of the major ports of West Africa.

The Atlantique Turquie-Sénégal Association (ATSA), Cheikh Anta Diop University and the Senegalese Ministry of Education are also among the coordinators of the conference, scheduled to kick off on Feb. 9, this Saturday.

Prime Minister Abdoul Mbaye will honor the reception dinner on Feb. 8, where an exhibition of sacred relics from İstanbul’s Topkapı Palace Museum will be displayed. “Diversity & Cohesion in a Globalized World: Contributions of the Hizmet Movement” is the title of the conference, with Islamic scholar Fethullah Gülen’s ideas the main theme to be discussed by academics attending from 12 countries.

Senegalese people are familiar with the prestigious Yavuz Selim Colleges established by Turkish entrepreneurs in Dakar and other cities. “With this conference, Senegalese people will be introduced to the fact that there are schools in over 140 countries that operate with similar motives of dialogue among nations, peaceful coexistence and respect, originating from Fethullah Gülen’s thoughts,” said Enes Muslukçu, editor-in-chief of Ebru.
Source: Today’s Zaman 7 February 2013

Arinc said: “I give my thanks to all my brothers and sisters who came here from Turkey with enthusiasm to open these schools and who enjoy working here with devotion and pleasure.