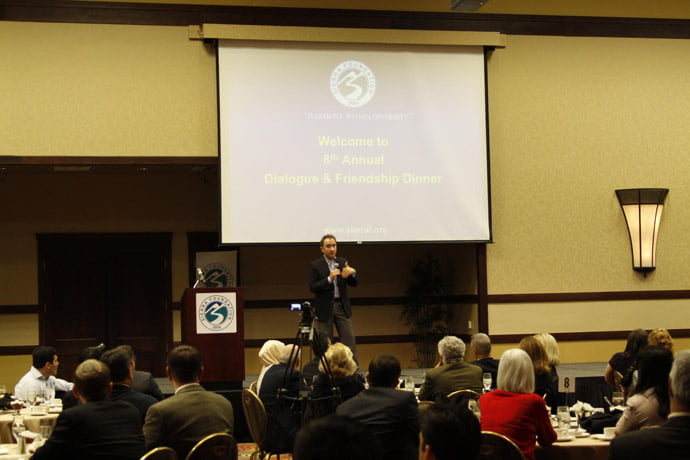 This year’s Dialog and Friendship Dinner by Sierra Foundation repeated its tradition of bringing together many around a dinner table in Northern Nevada. The dinner has become a platform for bringing together diverse set of guests around the table and starting dialog and friendship among different cultures, faiths and communities. The event was well attended by federal, city and state officials, faith and community leaders, academicians, many other distinguished guests from various segments of our society in Northern Nevada.

At Reno Ballroom of Silver Legacy, the event commenced with recognitions from Governor Sandoval, Senator Heller and Congressman Amodei, all emphasizing the value of dialog and dialog-promoting events like the dinner. President of Sierra Foundation outlined the foundation’s vision, “Harmony within diversity”, and summarized the motive for such dialog events. “We believe everyone should always strive for positive action, and new relationships with the near other, culturally different other, far other, and regional other.” he said. The night’s keynote speaker Mr. Mustafa Akyol offered a deep discussion of issues in modern Islamic society and a comparative analysis of them across other faiths and traditions. He pointed out how one can easily be mislead at the face of unknown and how blind literalism could lead to destructive misunderstandings.

The event offered live calligraphy demonstration, along with desserts, by a pioneering Turkish calligrapher Mr. Aydin Cayir. In closing remarks, Attorney General emphasized the theme of tolerance, respect for one another, and accepting all of our differences. “As we all go on our daily life, if we remember that theme, we would be such a better society and a better world.” she said.

Sheriff Haley praised the activities of Sierra Foundation and underlined the importance of looking each other without religious prejudices, and said “I truly believe that you look at people as human beings first.” Judge Sattler vowed the importance of dialog and finding commonalities via simple communication. He concluded “What shocks me is how infrequently people get together and simply talk to each other. Sit down on a table. They do not have the ability just to understand that the people they are dealing with are very much like themselves. We are not different. We are the same.” The dinner was attended by more than 100 and is 8th in its series.

A group of South Korean religious leaders visited the Intercultural Dialogue Platform (KADİP) in İstanbul on Saturday to discuss interfaith matters and share ideas about Fethullah Gülen, a well-respected Turkish intellectual and scholar who was recently awarded the Manhae Peace Prize for his contribution to world peace.