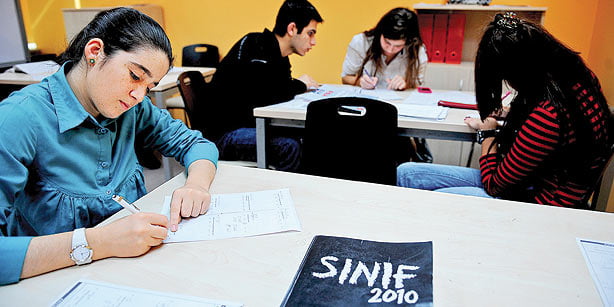 In Turkey, for several decades, prep schools have served as an effective tool to compensate for the problems of public schools and have provided a solid ground for equality in opportunity for poor students. Indeed, prep school education does not only provide equal opportunity for poor student, it also works as a force which undermines separatist nationalism in the southeastern part of Turkey. Thanks to the prep school system, many students living in the Southeast are today able to get their higher education in big cities like İstanbul or Ankara. As a result of this, they find the chance to leave their small towns or villages and explore life from a different perspective.

On the other hand, reading rooms and study centers in the southeastern cities play a vital role for the future of children whose families suffer from poverty and alienation because of the discriminatory state attitude that has been dominating the region for several decades. For so many years, the Southeast was marginalized and, as a result of economic underdevelopment and political instability, terrorism has invaded these cities. In addition to all of this, the lack of a functioning education system in this region has served the interests of Kurdistan Workers’ Party (PKK) terrorism. Due to having no civilian support and due to a lack of nongovernmental organizations that could be a remedy to their alienation, the young population has seen terrorism activities as a way to resist against state tyranny.

Indeed, there are so many problems in Turkey’s education system. For instance, it has long been dominated by a Kemalist/statist worldview and this has inevitably led to the constitution of a certain degree of suspicion (and sometimes hatred) toward religion and religious discourse and actors in the field of politics, society and academia.

The Kemalist indoctrination has also been one of the major elements that favored ideology rather than science in higher education. For so many years, the Kurdish issue, army-politics relations or Islamic banking and Islamic philosophy have been seen as “dangerous” research areas. Because if you put forward an argument clashing with the official ideology you would most probably be stigmatized as a reactionary (mürteci) academic who aims to undermine the secular regime. Thank God, such understanding has been almost eliminated; only a marginal sector thinks this way.

The prep schools established by non-state units and actors motivated by civil society play a key role in questioning such pathological understandings. They reach the marginalized sectors of society and pave the way for poor students to get a higher education at good universities. Thanks to the prep school system, with reasonable payments, the children of the “Black Turks” or “Mountain Turks” gain the chance to compete with the children of “White Turks” under equal standards. They, after graduating from good universities, become judges, teachers and academics and act as a catalyst in undermining pathological ways of thinking like labeling people as reactionary.

Without producing the relevant mechanisms and without putting an end to the exam system, the closing of prep schools would make things worse and would only increase the victimization of the disadvantaged sectors of society who have been wronged by the state over the years. Closing prep schools and centralizing education would only reproduce the Kemalist discourse that demonizes any view incompatible with it. This would ultimately lead to the loss of democratic acquisitions so far obtained.