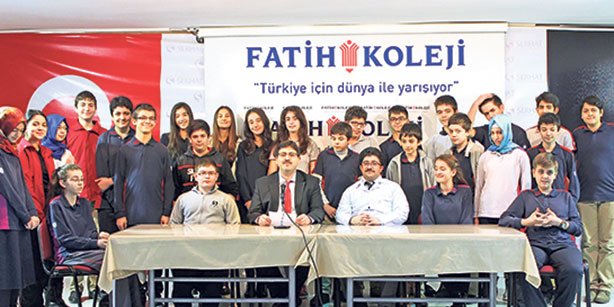 Students from Edirne Fatih Serhat High School who received high scores on the TEOG exam held in November pose together in this photo.(Photo: Cihan)

Students of the Fatih Schools network — which are inspired by the faith-based Gülen movement — popularly known as the Hizmet movement — were the top scorers in both the Transition from Primary to Secondary Education (TEOG) exams taken from Nov. 26-27 and April 29-30 and the Undergraduate Placement Examination (LYS) taken between June 13-21 across Turkey, as well as taking other top scholastic prizes.

According to a June 30 announcement on the website of the Student Selection and Placement Center (ÖSYM), in the first TEOG exam, 130 students from Fatih middle schools became TEOG exam champions by answering all the questions correctly, while 133 Fatih students missed only one question.
The second TEOG exam saw another 18 students of Fatih middle schools get a perfect score and 28 answer only one question incorrectly. Also according to the ÖSYM announcement, 53 Fatih college students were among the top 100 in the ranking of the LYS results, including Hakkı İsmail Korkmaz, a student of İstinye Fatih science high school, who ranked fifth. “I thank my family and teachers for their support. My advice to those who will prepare for the exam is that they determine their deficiencies and make their study program according to that,” Korkmaz said.

Fatih high schools also have 22 students among those ranking in the top 100 of the Higher Education Exam (YGS) results.

Informatrix is an international computer project competition, born from a desire to bring the world’s best IT students together. The competition is not just about promoting professional excellence; it also serves to promote intercultural dialogue and cooperation through the involvement of students and teachers from many different countries.

The JBMO aims to encourage mathematically gifted students in all participating countries, to foster friendly relations among the students and teachers attending the event and to create opportunities for the exchange of information between them.

Some private schools inspired by the Hizmet movement have being targeted by the ruling Justice and Development Party (AK Party) and pro-government circles since Dec. 17, 2013, when a massive corruption scandal implicating highly placed AK Party figures became public. President Recep Tayyip Erdoğan accuses the Hizmet movement and its sympathizers in the state bureaucracy of being behind the Dec. 17 operation in an attempt to topple his government. The movement has strongly denied all the claims and President Erdoğan and the AK Party have yet to present any concrete evidence proving the accusations. Despite restrictions on their operations put in place the government and a smear campaign about the movement, the Hizmet-inspired schools and their students continue to enjoy success.

In building his political career, Turkey’s powerful and charismatic prime minister, Recep Tayyip Erdogan, relied heavily on the support of a Sufi mystic preacher [Fethullah Gulen] whose base of operations is now in Pennsylvania. Mr. Gulen’s followers “never approved the role the government tried to attain in the Middle East, or approved of its policy in Syria, which made everything worse, or its attitude in the Mavi Marmara crisis with Israel,” said Ali Bulac, a conservative intellectual and writer who supports Mr. Gulen.

Taipei, Dec. 11 (CNA) The Hizmet movement, a social movement inspired by Turkish Islamic scholar Fethullah Gulen, could be a powerful argument for the theory that people need only good education to bring out the goodness in them, a U.S. scholar said Saturday. Mark Owen Webb, chairman of the Department of Philosophy at Texas Tech […]