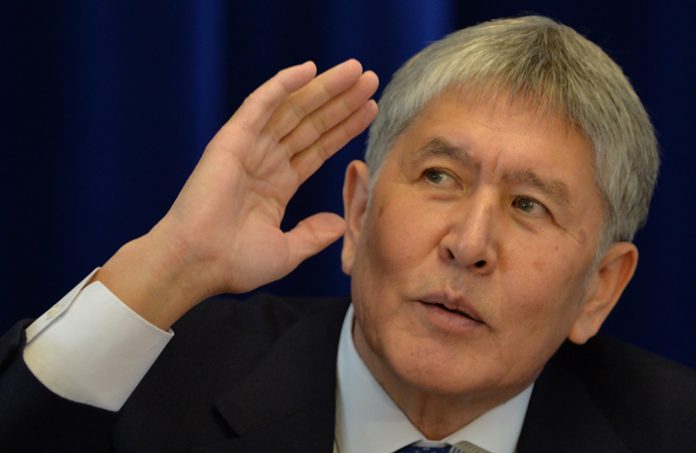 Kyrgyz President Almazbek Atambayev speaks during his end of the year press conference at the Ala Archa state residence in Bishkek on December 1, 2016. / AFP PHOTO / Vyacheslav OSELEDKO

In an open challenge to Turkish President Recep Tayyip Erdoğan, Kyrgyz President Almazbek Atambayev said on Thursday he does not know Fethullah Gülen, a Turkish Islamic scholar who lives in the US, but will not close schools run by Turks close to the Gülen movement, Sputnik reported.

“Linking the Sebat schools with a group that ponders a coup in Turkey and Kyrgyzstan would be nonsense. We are aware of what Sebat does. I have already ordered a change in the standing rules of Sebat. The education ministry will be one of the founders of these schools. The name will also be changed to Sapat,” said Atambayev during a press conference in Bishkek on Thursday.

Upon a question of whether a delay in the summit of Turkic Speaking Countries is related to the deteriorating relations with Turkish President Erdoğan, Atambayev said: “I am thankful to Erdoğan. Turkey has eliminated $50 million of Kyrgyzstan’s debt. Turkey has been constructing a hospital in Bishkek. The summit will be in late March or early April. We have talked about it both with Erdoğan and Kazak President Nursultan Nazarbayev.”

Kyrgyz deputy Omurbek Tekebayev claimed in October in parliament that President Erdoğan prevented the provision of medical treatment to Kyrgyz President Atambayev when he fell ill during a visit to Turkey in September, according to Kyrgyz news agency KirTAG.

The Kyrgyz deputy argued that Erdoğan resented the Kyrgyz president for refusing to cooperate with him in his witch-hunt against the Gülen movement. When Atambayev got sick while in Turkey in September, Erdoğan ordered hospitals across the country to refuse him medical services. Consequently, Atambayev went to Moscow for treatment through the intervention of Russian President Vladimir Putin.