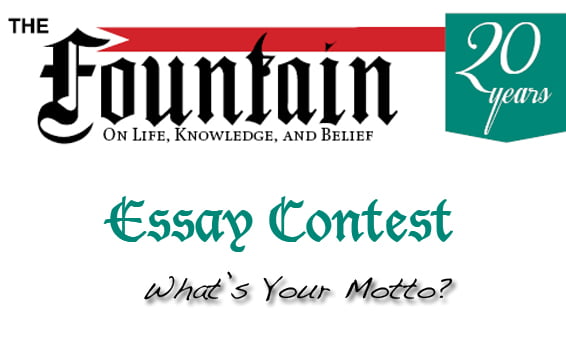 In celebration of its 20th anniversary,  the Fountain Magazine organized an essay contest titled “What’s Your Motto?” Hundreds of essays were submitted from four corners of the world. Magdalena Rusanova from Leiden, Netherlands won the first place, winning $1,500 cash prize. Here is the list of the winners:

“Congratulations to all winners who were selected by a jury of writers, scholars, and editors. We thank each one of the participants and appreciate all contributions,” said the the Fountain Editorial Board in a brief statement the magazine’s website.

Why did the Fountain choose this title, “What is your motto in life?” The Fountain welcomed 2013 with a new motto: On Life, Knowledge and Belief.

As the magazine has spent over two decades exploring life and its many meanings, its board have come to believe that knowledge and belief are the two most important tools for life’s journey and these three three words summarize what they want to embody in the magazine. Life is existence, with all its dimensions and veils. Knowledge is the human effort to remove these veils to reveal the truth beyond them. And belief is what gives truth its meaning and relevance to our being.

The contest was open to all writers worldwide, winners won below cash prizes:

The Fountain covers a wide range of topics including interfaith dialogue, science, technology, arts, culture and society from a faith perspective (especially Islam). It promotes a holistic approach to universe and human nature believing that science and religion are not in conflict; rather, they are two faces of the same reality. The Fountain encourages critical thought and scientific inquiry on a wide range of topics: physical science, social science, ethics, education, literature, religion, and comparative studies. All topics are to be dealt with fairly and substantively, and articles are to be balanced and judicious.