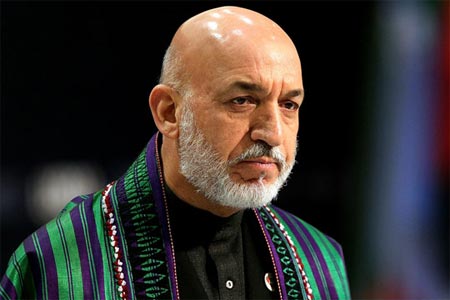 Afghan President Hamid Karzai has honored Turkish schools in his country, awarding them a prestigious state medal during a ceremony in Kabul on Monday. The ceremony was attended by Afghan Education Minister Farooq Wardak; the director general of Afghan-Turkish high schools, Hikmet Çoban; and a number of Afghan deputies. Çoban was given the Sayed Jamaluddin Afghan medal, which is one of Afghanistan’s most prestigious medals.

Four students from the Afghan-Turkish Girls’ High School were also given gold medals for their success at the International Environmental Project Olympiad (INEPO) in Turkey.

The school’s principal, Ubeydullah Dinler, and a teacher at the school, Gülbahar Dinler, were also given awards for training very successful students at their school.

Praising Turkish schools in his country, Karzai said: “Citizens of Turkey, [your country is] a sister and friend to Afghanistan. [You have helped] prepare Afghan students for international competitions by equipping [our] schools with modern and scientific equipment through undaunted efforts.”