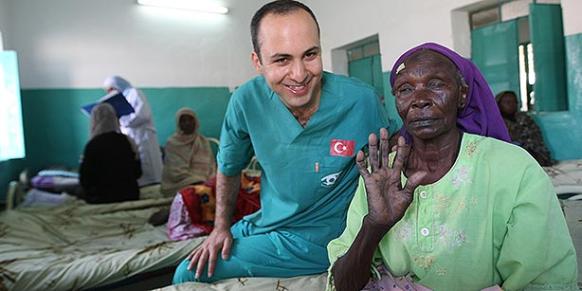 Turkish charity Kimse Yok Mu carried out 10,000 cataract surgeries on people in Sudan and other African countries in cooperation with other groups. (Photo: Cihan)

Turkish authorities have finally come up with a detailed set of measures and criteria to identify suspected Gulenist public officials after facing sustained criticism over its holist approach to brush any critic as Gulenist following its largest purge campaign in the republican history.

The question of how you designate a Gulenist official or public servant to fire or jail has been a matter of controversy and public debates for a while on TV programs after the government’s purge has reached to epic proportions: More than 120,000 public officials have been purged as of November 1. And that number only goes up. On Tuesday, Prime Minister Binali Yildirim proclaimed 16 criteria to determine who a Gulenist is as the government’s ongoing earth-scorching campaign against the Gulen movement never loses its pace and scope.

On Tuesday, the government announced 16-point guideline for authorities across all bureaucratic departments, ranging from security branches to education ministry, or even agriculture ministry, for launching a more effective purge without causing harm to “innocent people who have no relationship to Gulenists.”

The epic scale of purge has generated lasting controversy and public resentment as critics believe that the government targets opponents of all political creed rather than specifically aiming at a movement or a group. Facing mounting public criticism, the authorities moved to set up commissions in all cities in governor’s offices, and invited people and dismissed public servants to prove their innocence to reverse the verdict against them.

Deputy Prime Minister Numan Kurtulmus said in October that the government has received thousands of complaints about purges and dismissals, in a revelation that points to an acute problem associated with the purges. To palliate fears of people and soothe criticism, the government came up with a 16-point scheme that sets standards for designating a Gulenist.

The Justice and Development Party (AKP) sees Dec. 17-25 (2013) as milestone and critical turning point for its titanic war against Fethullah Gulen movement. For the government, it represents a coup attempt against an elected cabinet. In the last days of 2013, the police launched a sweeping corruption investigation that implicated inner circle of then-Prime Minister Recep Tayyip Erdogan and members of his cabinet, even his family.

While the government killed off the legal process by the purge of police chiefs and prosecutors that initiated the graft investigation, it had to battle with its after effects given trial of Turkish-Iranian businessmen, who was also a prime suspect of Dec. 17 graft probe, in New York at a U.S. court.

The government considers having a link to the Gulen movement, which it holds responsible for the graft investigation, since Dec. 17 as a crime. For authorities, putting money to Gulen-affiliated Bank Asya, after that day is enough to purge, dismiss or even place someone in jail.

Here are the criteria put forward by the government to decide who might be a Gulenist deserving to be purged:

— To provide financial contribution to Bank Asya and other companies of Parallel Structure-State [Gulen movement] after 17/25 December.

— Being a manager or a member of Gulenist associations or unions.

— Use of ByLock and other private encrypted programs, applications.

– Donation to [Gulen-affiliated] Kimse Yok Mu Derneği [Is Anybody There] charity organization.

– Attending conversation and gatherings, events of the Gulen movement.
– Unusually fast promotion to a special assignment, post outside ordinary procedure
– Donation to the Gulen movement
– Reliable information by informants, tips or confessions
– The results obtained from the review of the websites a Gulenist visited.
– Overseeing unusual operations of Gulen-affiliated companies, protecting and favoring them
– Being among those who act in favor of the movement within the police and judiciary
– Behaviors of those who stayed in dormitories of the Gulen movement in recent years
– Information obtained from other employees at a workplace
– Having continued to send children to Gulen-affiliated schools, preserving subscription to magazines and newspapers of movement since Dec. 17-25, 2013.

After its publication and prime minister’s announcement, critics argued that this presents a perfect textbook of fascism as the government justifies its actions, purges on ludicrous charges devoid of a legal base in universal standards and even country’s current laws.