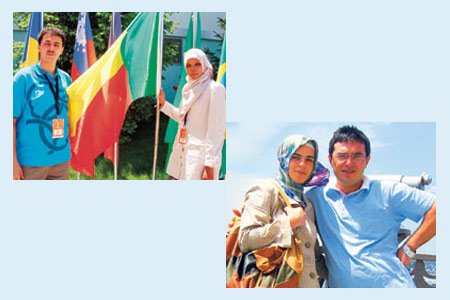 Teachers who have moved to various parts of the world with their families to work at Turkish schools there are redefining the limits of self-sacrifice. Having gone to countries they had never before heard of, they are now teaching Turkish to locals.

The Serin couple is two of those heroes of education who went to Laos, a country relatively unknown in Turkey, after 10 years of adventure in Tatarstan, where they met and got married. Hamdi from Kütahya and Mehtap from Eskişehir studied at the University of Tatarstan and started working at a Turkish school in Tatarstan. Speaking about the changes they went through after the move from Tatarstan to Laos, they said adapting to the climate was the most difficult part. “Russia was freezing cold. We adapted after some 10 years, and our daughter Esra did too. But Laos is too warm. She lived with a high fever for a long time. Doctors told us that her body had not yet adjusted to the new climate. We are now all fine. Esra learned Lao faster than we did. She can communicate with her friends with ease,” they said.The Ödemiş couple, on the other hand, started working in Russia but then moved to Macedonia. Zeynel from Giresun and Ayten from Erzurum met in Turkey and together went to Siberia, where they worked for five years in Buriat, where Buryats, the northernmost ethnic Mongols, live. After Mrs. Ödemiş was diagnosed with multiple sclerosis, a neurological disorder that affects young adults, the couple took their doctor’s advice and did not stay in Russia nor did they move to a country which is too warm. Since they did not want to quit working abroad at Turkish schools, they moved to Macedonia, where they presently work at the Yahya Kemal College. Their two-and-a-half-year-old daughter Sümeyra is bilingual and speaks both Macedonian and Turkish.

Ali Ögen from Sivas in central Turkey and Amahani from Chad work in Benin now. After having worked for three years in Chad, they moved to this country last year. Talking about the three years he spent in Chad, Ögen said he lived through a war each year. “Last year, we escaped with our lives with great difficulty. We took refuge in our school. The rebels assumed that there was no one inside; otherwise, we had no chance because they were shooting at anything that moved. It was the day before the civil war ended. We left the school with the help of locals. Only the presidential office went untouched by the uprising.

Bahadır and Betül Yeşil are another couple working in Africa. They are teaching Turkish in Malawi, where they moved four days after they got married in Turkey. Mr. Yeşil worked in Tajikistan for five years before he met his wife, who was thinking about going to Nigeria at the time. “I was planning to go to Nigeria, but then I changed my mind so we could be together in Malawi, a country whose name I had never heard of. I’ve now been working there for seven months and am the only woman among the six teachers of our school,” Mrs. Yeşil said. Turkish schools host thousands of similar memories worldwide.