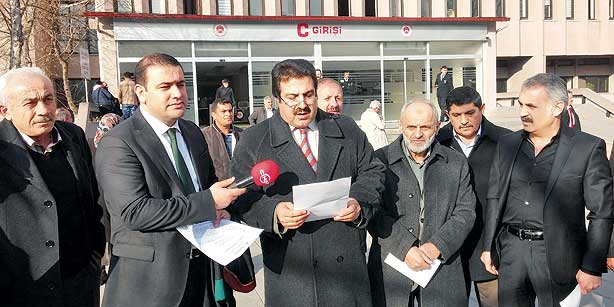 Twenty-two businessmen in Ankara on Monday filed a lawsuit against Prime Minister Recep Tayyip Erdoğan for his remarks likening the followers of the Hizmet movement to a historic group of assassins, claiming that he insulted their character.

Last week in his party meeting, when speaking about those he accuses of orchestrating the ongoing government corruption investigation, Erdoğan, in a thinly veiled reference to the Hizmet movement, spoke of members of a group who are like “hashashins,” and who had undermined the Turkish state previously in history by committing assassinations.

Stating that these people are being convicted without evidence or trial, Şahin said that the prime minister is insulting the members of the Hizmet movement by associating them with the first known terrorist organization in history. Hashashins reportedly used to kill people in 12th century Persia and Syria while under the influence of opium. The English word assassin is believed to come from the name of the hashashins, whose leader was a man named Hassan Sabbah.

Şahin also said that Erdoğan’s accusations went further, calling the members of the Hizmet movement a gang that aims to control the state, terrorist organization, a secret organization that is trying to destroy the government. “Erdoğan’s description of us as deceitful, corrupt and a virus in the body are unacceptable,” Şahin went on to say. He argued that although the prime minister did not specify any names in his statements, anyone with an average intelligence would be able to understand that he meant the Hizmet movement.

Stating that the people who are committed to the Hizmet movement are known to be education volunteers by the public, Şahin said that the kind of accusations made by the prime minister should not be directed at these people.

“We deny the prime minister’s remarks which openly insult our character and do not reflect the truth,” Şahin pointed out, before saying that the group of plaintiffs had filed a lawsuit against Erdoğan based on Article 24(2) of the Turkish Civil Law.