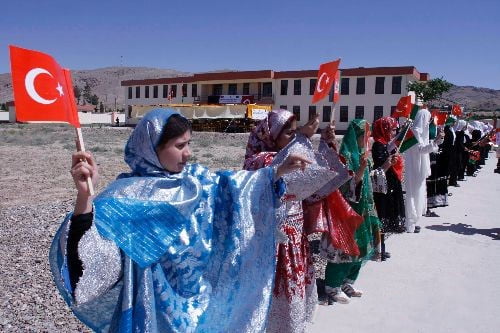 The second high school for girls built by Turks in Afghanistan recently opened its doors following an official ceremony. The school, built in Herat, is a continuation of benevolent Turks’ efforts to invest in Afghanistan’s future through building schools countrywide. The first such school was opened in Kabul.

The opening ceremony was attended by Herat Governor Mohammad Yusuf Nuristani, high-level representatives from the Afghan Ministry of Education, deputies and students and parents. Delivering the keynote speech at the ceremony, Nuristani said, “We thank our Turkish brothers and friends for completing the construction of the high school for girls, and we want them to construct schools in other provinces as well.”

Stressing that they want more high schools for girls to be built in Afghanistan, the director general of the Turkish-built Afghan high schools, Hikmet Çoban, said: “The schools we have opened make us happy, but they are not enough. The schools we could not open and the children we have been unable to educate worry us more.”

According to information provided by the Herat high school’s principal, Yusuf Koca, the school was built thanks to the contribution of benevolent Turks and Afghans. “An exam was held to select students to be accepted into the school. Of the 550 students who took the exam, 120 were accepted. Education is quite important for the Afghans. This is the second such high school for girls we have opened in the country, and this makes us quite happy,” Koca said.

Humeyra Tenha said she is proud to be able to attend the Turkish-built school. “I thank my Turkish brothers,” she said. Another girl, Ruhina Qayseri, told Today’s Zaman that she is very happy because her Turkish brothers opened schools in her country despite security problems that continue to plague Afghanistan.