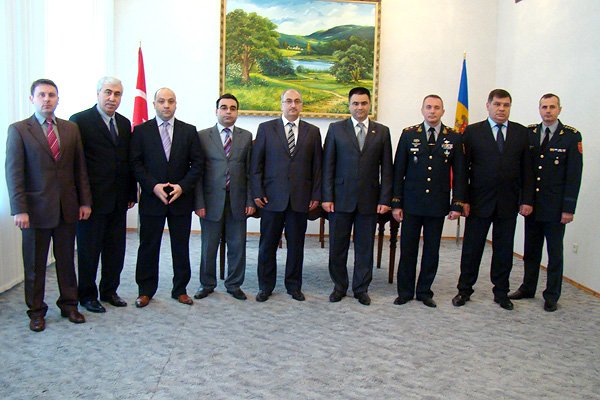 Chisinau, October 31, 2012 — The Ministry of Defense and Orizont High School concluded a cooperation agreement in the educational area.

The document, signed by Defense Minister Vitalie Marinuta and general director of Orizont High School, Turgay Şen, highlights the cooperation between the two institutions in the military patriotic education domain, as well as the admission of National Army service members’ children to Orizont High School.

According to the Minister of Defense, the agreement is the first one for the military institution and provides facilities to service members’ children willing to get high quality studies at a reasonable price. “This is a social project for children with potential that do not have enough money for studies. Thus, the service members’ children will pay only 50% of the fee and the children of service members dead on duty will study for free. We hope that such agreements will be concluded with other high schools too, as well as with institutions of higher education from all over the country”, the Defense Minister said.

The quoted source also said that the military institution assumes the responsibility to carry out activities in the military patriotic education area meant to familiarize high school pupils with the activity of Republic of Moldova state institutions, mainly the one of the Ministry of Defense. “We intend to organize in the high school seminars and classes on issues related to active duty service with demonstrations of military elements. The high school pupils will also visit military units, exhibitions of the Center of Military History and Culture and will participate at the events providing a complete image of the National Army”, the Minister of Defense stated.

In his turn, the general director o Orizont High School said that throughout 20 years of activity, the institution he is the leader of has become known through competitiveness and high quality studies demonstrated by pupils’ results at the national and international competitions. “We must provide such possibilities to Moldovan officers’ and NCOs’ children through concrete facilities. This is a project of cooperation between the Ministry of Defense and Orizont High School and we would be pleased to accept in our institution the children of those who serve the Republic of Moldova’s citizens”, Turgay Şen said.

MUSTAFA EDİB YILMAZ, KIZILCAHAMAM While traveling from downtown Ankara to the tourist district of Kızılcahamam in springtime, one definitely notices how fabulous the poppies are that cover the hillsides. It would be difficult for many travelers to imagine a better view. However, for about a week this conclusion is certainly untrue for anyone whose destination […]