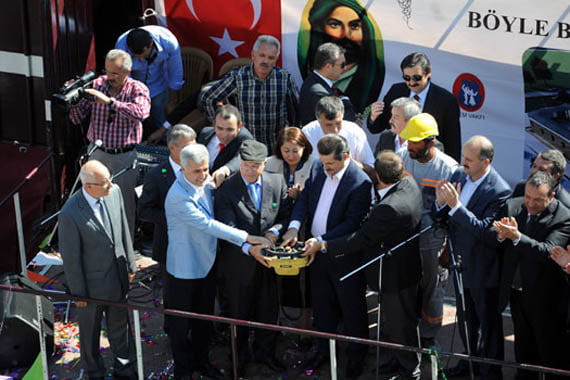 Protests against a joint mosque-cemevi (Alevi house of worship) complex project are meaningless because the project will help alleviate tensions between Alevis and Sunnis in Turkey, Alevi community leaders said on Monday.
During the groundbreaking ceremony of the complex in Ankara on Sunday, a group of nearly 500 people protested against the project, clashing with the police and throwing stones at them.

Speaking to Today’s Zaman, Professor İzzettin Doğan, the head of the CEM Foundation, one of the partners of the project, warned people against provocations, saying those who do not want peace took part in the protest against the project but they are not aware of the fact that they are being used as part of provocations.

“Who would be hurt if a mosque and a cemevi are built next to each other?” Doğan asked, arguing that the protesters are unaware of what the Alevi faith is about. According to him, those who do not support the project will remain a marginal group.

Republican People’s Party (CHP) Deputy Chairman Erdoğan Toprak urged everyone to embrace the project, saying such a project should belong to the entire society. “In both the Alevi and Sunni faiths, love and tolerance are important. We have to unite against those who want to divide Turkey. Such a project will also lay the grounds for unification.” While encouraging the spread of such projects across Turkey, Toprak urged the state to grant cemevis official recognition and to complete the Alevi opening process.

CHP Ardahan deputy Ensar Öğüt said he found the project a very positive step, congratulating all those who contributed to the project. “I wish there were similar examples all over Turkey,” Öğüt stated, pointing out the importance of properly explaining the project to society. “Everyone should be told that this project is independent of politics and aims to strengthen the brotherhood between the Alevi and Sunni faiths,” he said.

CHP Sivas deputy Malik Ecder Özdemir, on the other hand, said such a project will not bring about the expected results unless the state delivers Alevis’ demands. “It looks a little like a forced unification,” he commented.

The president of the Anatolian Alevi-Bektaşi Federation, Cengiz Hortoğlu, said he observed a high level of support for the project in the Alevi community. Calling the protesters “marginal,” Hortoğlu said, “If these people are Alevis they should know that there is no violence and hatred in the Alevi faith.” According to him, those who are disturbed by the project are those who do not want peace in society.

In a similar comment, Confrontation Society President Cafer Solgun believes that the people on both sides who conduct politics based on polarizing society are uncomfortable with the project. “Such a civil society initiative becomes much more important in an atmosphere in which the state remains indifferent to Alevis’ demands,” Solgun further commented. He finds the Alevis’ fears of assimilation baseless. “We have not been assimilated for centuries despite brutality, discrimination and pressure from the state. Are we supposed to be assimilated when a mosque and a cemevi are built next to each other?” he asked.

Turkmen Alevi-Bektaşi Association President Özdemir Özdemir also described the initiative as a peace project, saying some bad forces are against the project because it will ruin their plans for society. According to him, those who wish to bring in the sectarian divide from the Middle East into Turkey are opposing the project. Özdemir said the complex is the hand of peace that Islamic scholar Fethullah Gülen extended to Alevis for love and brotherhood.

Özdemir said the protesters do not represent the sensible Alevi community and that the large crowd who attended the groundbreaking ceremony is proof of the support for the complex.

*İbrahim Doğan contributed to this story from İstanbul

Twin daughters of the Istanbul-based Şengün family were handed over to their 65-year-old grandmother as both E. Şengün and his wife F. were arrested after being kept under detention for 30 days. They are about to turn one with no father or mother in company.