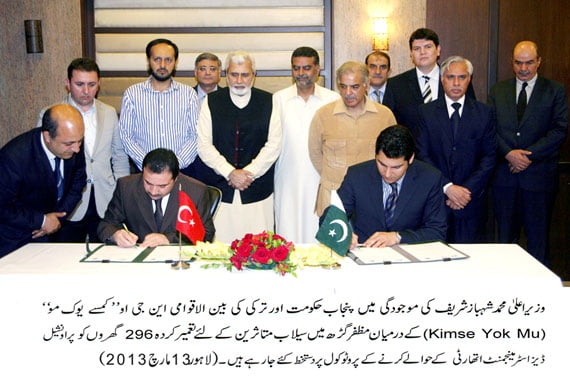 A protocol was signed between Punjab government and an international NGO of Turkey, Kimse Yok Mu, at Model Town, here today under which Turkish NGO has handed over a modern village consisting of 296 houses for flood affectees at moza Rakh Khanpur district Muzaffargarh, to Provincial Disaster Management Authority. Punjab government had provided 351 kanals land for construction of houses under an agreement made between Punjab government and Turk NGO a year ago. Director General PDMA Mujahid Sherdil and Chairman Turk NGO Onal Ozturk singed the protocol.

Talking on the occasion, Muhammad Shahbaz Sharif said that Pakistan and Turkey are tied in strong ties of friendship and brotherhood. He said that Turkey is such a sincere friend of Pakistan as has always stood with Pakistan in every hour of trial. He said that Turkish government and people have helped Pakistanis generously in every difficulty whether it is earthquake, flood or natural calamity. He thanked Turkish government and people on the gift of a modern village Allama Iqbal Town consisting of 296 houses, for flood affectees of Punjab.

Chairman Onal Ozturk said that strong friendly and brotherly relations exist between Turkey and Pakistan and the gift of 296 houses by Turkish NGO reflects the relations between the two countries. He said that a modern village comprising 296 houses, is a gift for people of Punjab by Turkish people. Director Pak Turk Foundation, Regional Director Pak-Turk Foundation, Turk businessmen, Project Director Allama Iqbal Town Muzaffargarh and Deputy Chairman Pak Turk Schools and Colleges Pakistan were also present on the occasion.