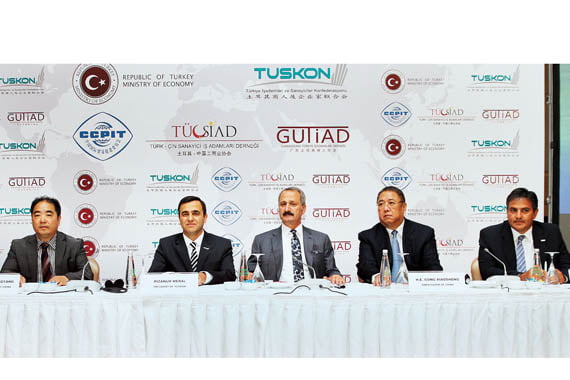 Turkish and Chinese businessmen expressed that both sides are seeking to expand their trade ties at the Turkey-China Investment Forum on Thursday.

The forum, which was organized by the Turkish Confederation of Businessmen and Industrialists (TUSKON) in İstanbul, has attracted more than 130 businessmen from China, who are planning to improve business relations in Turkey, and 300 Turkish businessmen.

TUSKON chairman Rızanur Meral stated in his opening speech that the trade deficit between Turkey and China reached $68 billion over the last 10 years. Meral pointed out that approximately 18 percent of the foreign trade deficit stems from China’s companies and he recommended that China increase its efforts in the field of economic cooperation and investment.

Meral also stressed that by having this forum, TUSKON is encouraging more investors from China to start planting their business in Turkey in order to close the trade gap. TUSKON Chief Representative for China Kerami Göz told Today’s Zaman that the main agenda for organizing this forum is to match-make between both countries in order to strengthen the bilateral relationship.

“TUSKON has already brought approximately 130 companies from China for business-to-business (B2B) meetings,” he said. “We are providing opportunities for China’s companies to invest here and open a new gateway for us to do business with them so that we can balance the import-export trading between China and Turkey.”

One Chinese businessmen, Charles Cai, told Today’s Zaman that he believes the business relationship between both countries has a very bright future. “We are here to seek an opportunity to expand our trade with some Turkish companies in order to strengthen the relationship,” he said.

Another businessman at the event, Selahattin Çolak from Arsel Elektronik İthalat İhracat said, “This is a good event in order to advertise to people the good relations between the countries.”

The businesses present at the event were predominantly from the construction, food, textile, energy, tourism, mining and machine manufacturing sectors.

Ethiopian and Turkish business tycoons met here in Ethiopia at the Ethiopian Chambers of Commerce and Sectoral Associations’ office for the purpose of surfing business opportunities in the two countries.