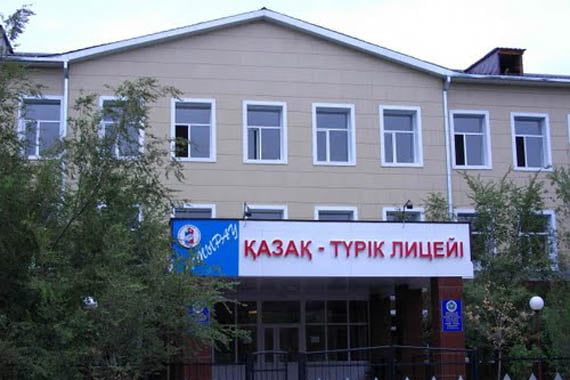 It was exactly 20 years ago on August 25th in 1993 when Mr. Suleyman, Ali and I arrived in the city Atyrau -formerly known as Guryev- located off the Caspian Sea. The provincial education department official, Ms. Jayla greeted us with flowers and then we moved in an apartment in the neighborhood Avangart. Ferhat, and Nurullah joined us later on and we began the academic year together with our local colleagues, the deceased Siguat Weizov and Ms. Gulbarsin.

Kazakhstan was a recent republic back then. It had been less than two years since it gained its independence. Soviet ruble was still in use and a Lenin statue was still standing outside the provincial government building.

We weren’t able to find everything we needed. We missed both clean tab and bottled water, which wasn’t even available. We would therefore boil and then cool down the water to drink it after filtering its sediments. We would to stay and experience extremely difficult times together.

We were rushing to learn Kazakh and Russian. The best part of those difficult times was that we strengthened our friendship. We very much loved our Kazakh students. They had a shining eyed-enthusiasm for learning. I told them: “You can be the leaders of Kazakhstan in the future if you can speak Kazakh, Russian, English and Turkish and study particularly petroleum engineering.” My former student Tanat Kuangaliev would remind me my words at the school’s 15th anniversary in 2008. Tanat has a very good job and happy life today.

I was greatly happy to have been invited to the 20th anniversary of Atyrau Kazakh-Turk High School, as one of its first teachers. Our faithful students covered all the transportation and arranged everything. We met with some of our old friends at Ataturk Airport and boarded the plane in excitement on August 30th, just like we did 20 years ago. Many of our former students were there to greet us on arrival, which the other passengers watched in astonishment. Our students took us to Dostik teaching center’s dorm next to the school by their luxurious cars.

I was moved to see Nurullah Ciftci, whom I hadn’t seen for 18 years, and -my once roommate- martyr Yasin’s father, Sinan Calkim.

Everyone was there except for the movie Selam’s inspiration Yasin Calkim, whom we lost to the Ural River on August 10th in 1994. But his father Sinan Calkim was with us. He told us something that we hadn’t known before. He told that he came to Alma Ata in his dream he saw before his son’s death. He further said that the places he saw in his dream were in fact the places he had been to in Alma Ata later, which made us surrender to the reality of death and fate.

We had a picnic by the Ural River together with a great number of alumni and current students.

We also attended the school’s inaugural ceremony. As the first teachers at Atyrau Kazakh-Turk High School, each of us was presented a plaque. Afterwards, we sang the Kazakh national anthem in unison.

Next, we e took a boat trip on Ural River, just like we did in 1995. We could witness the scenery and the progress Atyrau had made since. Yasin’s father Sinan Calkim was with us too. I watched him and couldn’t help crying. He had sent his son to Kazakhstan. But his son died when he was trying to save his student’s life. It was touching to photograph the Ural and Sinan in the same frame. The movie “Selam” could have been a better one if Yasin’s full biography was filmed. Indeed, he was living in the hearts as we kept remembering him and had his memories with us.

The mother of the student Nursultan Yerkariev -whose life Yasin had saved- Balziba Yeskariev invited us to her house. We had the famous Kazakh dish “bes parmak”. The fish caught by the trap that took Yasin from us was served too.

It was as if we were living the days in 1993. Balziba’s husband Imran had passed away. He would get us angry by reading from books against our Prophet Muhammad but we wouldn’t respond out of respect.

We spent our last night playing football on the school’s pitch for two and a half hours. I had no idea how the time passed or where we got that energy from. We were feeling exhausted even when we took the plane in the morning.

We were back in Turkey taking with lovely memories with us. It was as if we relived the days 20 years ago. But Yasin’s father Sinan Calkim was with us instead, on behalf of his son.

We could realize how fast the 20 years flied away over the last five days. I asked myself: “Would you go to Kazakhstan again if you had the chance?” Yes, I would go without a second thought.

Greetings and lots of love to my Kazakh students and brothers reading this piece.