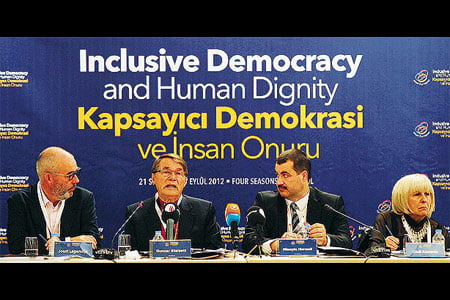 A panel discussion organized by the Abant Platform and Fountain Magazine was held in İstanbul on Friday. (Photo: Today's Zaman)

Gunnar Stalsett, the bishop emeritus of Oslo, warned about a hatred of Islam at a joint panel discussion organized by the Abant Platform and Fountain Magazine in İstanbul on Friday. “When I hear the word ‘Islamophobia,’ I think it is too mild. There is a hatred of Islam. It is not only about being afraid of Islam, it also includes hatred,” said Stalsett, who is known for his article, “The Spirit of Norway” which called for a “reconciled diversity” following the Breivik incident in Norway in 2011.

“Leaders and citizens need to mobilize against the evils of Islamophobia and xenophobia,” underlined the Norwegian bishop while adding that “terror in the name of God is the greatest blasphemy.”

Hüseyin Hurmalı, the secretary-general of the Abant Platform, said in his opening remarks that “the reaction in Norway following the killings of Brevik were more inclusive compared to the reaction after 9/11,” adding that “the response was for a more multicultural and multi-religious society.” However, he also noted the existing sympathy for Breivik’s ideas among far-right politicians in Europe.

Referring to the Breivik’s killings on July 22, 2011, Stalsett said that “this unspeakable act of violence was a threat to multiculturalism.” During the discussion where issues of tolerance, dialogue and hate speech stood out, the bishop said that the overall goal of the Abant Platform is a “challenge to the divisive power politics in every country and every region.” After giving examples from his experience of forced assimilation during his childhood, Stalsett said that “my background led me to work for unity among Christian churches.” He further underlined the necessity of developing the concept of “tolerance which is not something that the stronger grants to the weaker.”

In response to a question about the offensive film insulting the Prophet Muhammad, Stalsett said that Christian communities are not offended by Jesus caricatures, but “I am not saying that this is the way that should be adopted.” Referring to the increasing level of hatred towards Islam in Europe, he said that “when I heard about the attack in Norway I said, ‘My God, I hope it is not an asylum seeker or a Muslim.'”

Emphasizing the common value of human dignity in all Abrahamic religions, the bishop defined the Arab Spring as a quest for dignity, and cautioned not to expect the fruits of democracy for at least two years in the region. “As I watched the young men and women in Tahrir Square, I thought they were asking for human dignity,” he said.

Cemal Uşşak from the Foundation of Journalists and Writers, referred to the multicultural nature of the Ottoman society and said that “people assume that a Turkish and Sunni Muslim majority ruled Turkey for decades, but that is wrong.” After criticizing the existing constitution because it is a remnant of the 1980 military intervention, he called for a new constitution. Uşşak also said that an “inclusive democracy was not possible unless the rule of law ensured a secure environment for everyone in Turkey.”

One of the participants of the roundtable, Yusuf Altıntaşlı, the secretary general of the chief rabbi in Turkey, criticized the veiled discrimination in Turkey, arguing that “even though we are legally citizens, as minorities in Turkey, in practice we are not able to become ambassadors, generals or high level officials.”

Bülent Keneş, the editor in chief of Today’s Zaman also criticized current discrimination in Turkey, particularly of headscarved women and said that “although some problems have been overcome in theory, it is still not clear what headscarved women can do in the public sphere [in terms of government jobs],” adding that “the lack of representation of headscarved women in Parliament is a shame.” He also called on the Justice and Development Party (AK Party) government to “not grant, but return the rights of Kurds, non-Muslims and Alevis in Turkey.”

In the discussion, most of the participants pointed out the issues of ethnic and religious minorities in Turkey which stem from the policies of the regime. Similarly, Reha Çamuroğlu, a former member of Parliament, stated the importance of the rule of the law and said that “the legal system in Turkey should be strengthened with punishments for hate crimes, which are somehow tolerated in the society.”

Prof. Ersin Kalaycıoğlu from Işık University, on the other hand said that “we first have to set up a complete set of laws in which everyone is equal in the eyes of the law and then proceed onto the issue of hate crime.”

The participants continued with a day-long roundtable discussion.

ALİ ASLAN KILIÇ, ANKARA In Muş, where I was during the final days of August for the anniversary of the Battle of Manzigert, I had the chance to speak with citizens from both Manzigert and Ağrı about the terror problem and the solution process aimed at Turkish-Kurdish peace. Last Sunday, I was in the neighborhood […]