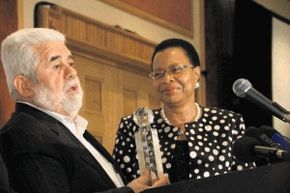 She said doctors were keeping him in hospital to ensure that he was fully recovered before he was discharged.

“Madiba is fine,” Machel said. “I want to thank all the people of South Africa, Africa and the world for praying for Tata.”

The awards were organised by the Turquoise Harmony Institute.

The award is bestowed upon outstanding individuals or organisations that are seen to have made noteworthy contributions to dialogue, peace and harmony in the society.