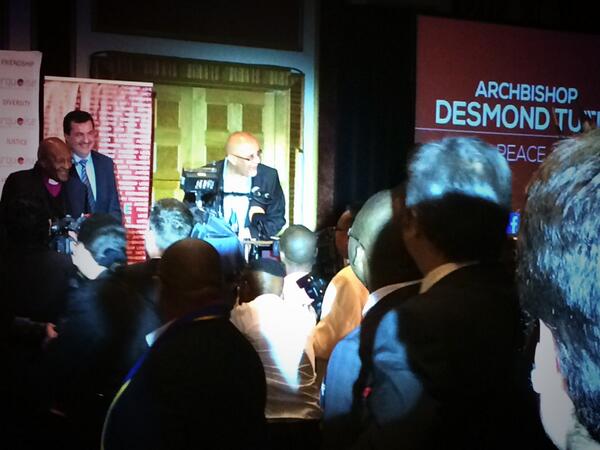 “I am very deeply honored and I want to commend the association for the work that they are doing to promote better relations between different groups of people,” Tutu told the Cihan News Agency in an exclusive interview.

The Gulen Peace Award is the most prestigious award amongst many other awards, awarded by the Turquoise Harmony Institute to prominent and influential South Africans, including Graca Machel, the wife of the late Nelson Mandela, and Ahmed Kathrada, Nelson Mandela’s prison mate who fought alongside him against the previous apartheid government.

“They assert that they want to follow our concept of Ubuntu and I have to say that I have been very impressed,” the archbishop said, “I was listening to an account of some of the things that are happening and it’s very good to hear young people inspired to work for dialogue and diversity and peace.”

The concept of Ubuntu in South Africa promotes “humanity towards others”.

“Adam could not be fully human on his own, we are programmed to be interdependent, I learn how to walk like a human being by imitating other human beings, we are fundamentally made for complementarity, a person is a person by other persons, to harm other is to harm oneself,” Tutu addressed the crowd at the ceremony.

Other awards presented on the night included the Posthumous Freedom Award to Oliver R. Tambo for his struggle against the apartheid government and the Sports Award to popular South African football club, Orlando Pirates.

Speaking during the 13th edition of the International Festival of Language and Culture at Nelson Mandela Theatre on Thursday evening, Mbete, who was guest of honour, said rather than seeing people fight, she would love to see them sing and dance. She said she was delighted to be part of the event.

The German government, led by Chancellor Angela Merkel, has said an extensive assessment of the organizations and foundations of Islamic scholar Fethullah Gülen’s movement in Germany failed to identify any evidence of illegal activity, daily Zaman reported.