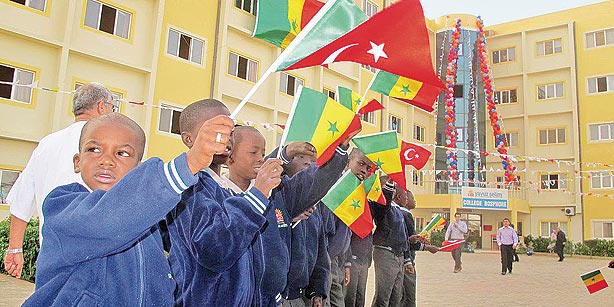 Turkish politicians have increasingly been voicing their concerns over the closure of such schools, which provide an education to thousands of students abroad, saying the move is personally motivated and unwise.

Taraf columnist and Armenian activist Hayko Bağdat said no state should intervene or shut down an institution which is established with people’s own capital and belongs to religious or political groups.

“Also, it is ridiculous to try to shut down schools in other countries. If these institutions are carrying out illegal activities that would lead to an emergence of security vulnerabilities, you should prove it or disclose it. Therefore, this is a backward attempt which is totally based on revenge,” said Bağdat.

Esat Kıratlıoğlu, a former minister from the True Path Party (DYP), also voiced his concerns over the government’s attempts to shut down Turkish schools abroad, saying “even the thought of closing down schools is completely wrong.”

Kıratlıoğlu stated that Erdoğan has created the term “parallel structure” in reference to the faith-based Hizmet movement. “The prime minister believes the parallel structure will stage a coup against his rule, which is why he is trying to crack down on the schools. But closing down the schools would be the worst thing for Turkish people,” said Kıratlıoğlu.

Former leading member of the ruling Justice and Development Party (AK Party) Ertuğrul Yalçınbayır also harshly criticized the government’s attempts to close Turkish schools abroad, underlining that closing down such schools would be in “violation of both national and international laws.”

“Such an attempt is obviously against the Constitution,” added Yalçınbayır.

“Management means giving the person who works for this country their due,” said Baydar.

“Everyone should support these schools. We are ready to provide our venues for the Turkish Olympiads,” said Büyükerşen.

Foreign Minister Ahmet Davutoğlu has sent orders to Turkish embassies to take steps towards the closure of Turkish schools, according to many reports. The foreign minister has also defended instructions given to Turkish embassies and representations abroad to have Hizmet-affiliated schools shut down. Davutoğlu said the reason behind the orders was that a number of foreign civil society representatives had sent letters to officials in their countries in which they lodged complaints about Turkey.

Recent reports say Erdoğan personally asked Kurdistan Regional Government (KRG) Prime Minister Nechirvan Barzani to close down Turkish schools in the autonomous region of Iraq during Barzani’s visit to Turkey in mid-February, according to sources close to the KRG prime minister. Erdoğan also called on the administration of Pakistan’s Punjab region to shut down its schools linked to the Hizmet movement.

Last month, parents of students at the Yavuz Salim Anatolian School in Kanifing, Gambia, received a letter announcing its immediate closure. According to reports, the national education authorities of Gambia reportedly sent a one-sentence letter to the principal ordering the school’s immediate closure, and the principal in turn sent a letter to all parents announcing the government’s decision to close down the school.

Students from Turkish schools in the country dominated a ceremony in the Federation of Bosnia and Herzegovina in which the Ministry of Education rewards those students who are successful in national and International Olympiads.