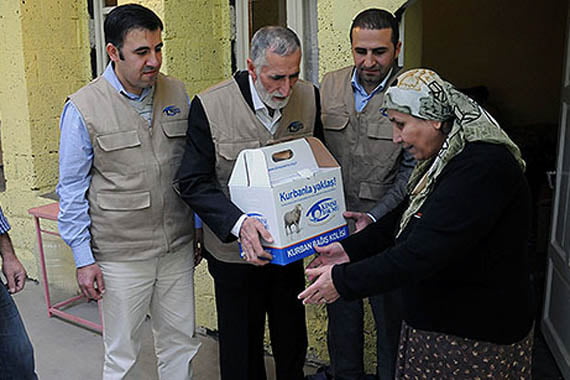 Turkish charity foundation Kimse Yok Mu (Is Anybody There) aims to distribute the meat of sacrificed animals to 300,000 needy people both within the country and across borders in a campaign with the tagline “Share your donation, and maintain brotherhood.”
Plans to distribute meat of sacrificed animals began in Kimse Yok Mu as the religious festival of Eid al-Adha (Feast of the Sacrifice) — during which all able Muslims are required to sacrifice an animal to God — is approaching. As they have done in previous years, the charity continues to hearten people all over the world with the aid it provides. The charity, which last year managed to send donations to people from 73 countries, now aims to reach people from 100 different countries on several continents.

The donations will be distributed in Africa, Asia, Balkan states, Middle East and South America along with all 81 provinces within the country. Volunteers will participate in the delivery of the donations, handing over the packages of meat to predetermined families inside and outside the country.

The head of the foundation, İsmail Cingöz, stated that they would sacrifice animals in 81 provinces in Turkey and distribute them to needy families from different parts of the country. He further said that they were planning to reach 300,000 families outside the country to build peace bridges between needy families and the volunteers taking part in the delivery of donations.

Abdülmuttalip, a Somali man who was provided with a donation sent from Turkey, expressed his affection for Turks’ carrying out activities in his hometown, saying: “ I love Turkish people. They are very caring. Last year I tried to help them out with the work they carried out here. One day, one of them asked me why I wasn’t married. I answered saying there was somebody I intended to marry but since I didn’t have money to hold a wedding meal, I couldn’t. Upon hearing that, they offered to hold the wedding for me on the third day of the feast. We had our wedding meal with the meat of sacrificed animals. I’m so grateful to them.”

How is the act of slaughter performed?

This year, as in previous years, the act of sacrifice will be performed in designated places in hygienic conditions, accompanied by the official witnessing theologian and a vet, abiding by the rules of Islam. The name of the people sacrificing animals through a proxy will be read out loud before the slaughter and noted on paper after the act. A message will be sent to the donor saying the act of slaughter is completed.

The prices set for those who want to donate a sacrificial animal for the approaching feast varies depending on the country they will be sent to. Donating in Turkey costs TL 700, according to the list of prices provided by the charity. There are three ways to donate a sacrificial animal: One can pay for it at one of the charity stands at specific locations, send money to a bank account or donate online via the charity’s official website, www.kimseyokmu.org.tr.