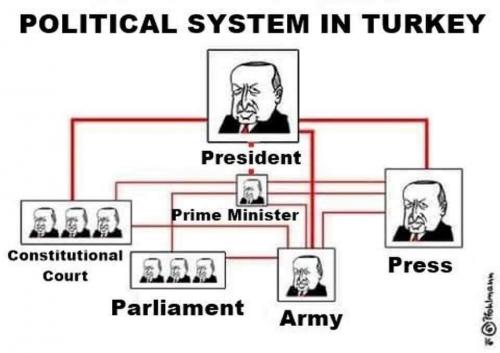 Ruling Justice and Development Party (AKP) Çanakkale deputy and parliamentary group deputy chairman Bülent Turan has said the AKP government will not stop a witch-hunt in the state bureaucracy for the sake of 1 percent of people who were mistakenly purged among 70,000 after a failed coup attempt on July 15 of this year.

Speaking to reporters in Parliament on Saturday, Turan was responding to criticism from opposition parties accusing the AKP government of enforcing decrees during the ongoing state of emergency merely to silence dissident voices.

“We won’t stop hunting [dissidents] merely because of criticism that there is witch-hunt [against dissidents],” Turan said.

Turan also targeted main opposition Republican People’s Party (CHP) leader Kemal Kılıçdaroğlu for his call to the government to halt the witch-hunt in the state bureaucracy.

“Calling on the government to stop the witch-hunt is equivalent to supporting FETÖ. Should we not take action? Of course we will. We will remedy the situation if any mistake has been made. However, this [Kılıçdaroğlu’s] stance is going to give psychological help to FETÖ members.”

FETÖ is an abbreviation coined by the government to describe the alleged terrorist network of the Gülen movement, a civil society organization inspired by the views of US-based Turkish Islamic scholar Fethullah Gülen, who the AKP government accuses of masterminding the July 15 coup attempt.

Thousands of people have been purged from state bodies, over 41,000 detained and more than 22,000 arrested since the coup attempt. Arrestees include journalists, judges, prosecutors, police and military officers, academics, businessmen, governors and even a comedian.

Turkey survived a military coup attempt on July 15 that killed over 240 people and wounded more than a thousand others. Immediately after the putsch, the government along with President Recep Tayyip Erdoğan pinned the blame on the Gülen movement. Despite Gülen and the movement having denied the accusation, Erdoğan — calling the coup attempt “a gift from God” — and the government launched a widespread purge aimed at cleansing sympathizers of the movement from within state institutions, dehumanizing its popular figures and putting them in custody.

‘Appointing trustees is the government’s right’

Supporting a recent government announcement concerning the appointment of trustees to 28 municipalities run by the pro-Kurdish Peoples’ Democratic Party (HDP), Turan said there is no difference between the terrorist Kurdistan Workers’ Party (PKK) and FETÖ. “A municipality cannot serve a terrorist group. Appointing trustees is a right. I can understand [HDP Co-chairman Selahattin] Demirtaş’s reaction, but I don’t find the CHP’s reaction to the government decision [to appoint trustees] appropriate,” he said.

Turkish Interior Minister Süleyman Soylu stated in Ankara on Friday that 28 municipalities in the country’s eastern provinces that have links with the terrorist PKK would be terrorist-free municipalities within 15 days.