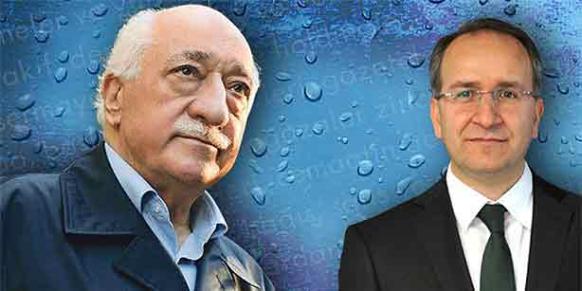 Turkish Islamic Scholar Fethullah Gülen (L) is pictured with his lawyer,Nurullah Albayrak, in this collage prepared by Today's Zaman.

Noting that Turkey’s extradition request will reveal the illegal activities by the government, Nurullah Albayrak, Gülen’s attorney, said the request to extradite the scholar is unlawful as his client is able to testify where he currently resides should he be called on to do so.

“Mr. Gülen has testified as part of giving judicial assistance to American authorities in the past regarding cases that he was acquitted of. It is known that even then, the prosecutor here let his bafflement at the frivolity of the accusations be known,” he said.

The 1st İstanbul Penal Court of Peace decided there was “sufficient tangible evidence” and agreed to issue the warrant for Gülen, a Turkish Islamic preacher who advocates a moderate Islam rooted in modern life. The move is a prelude to a formal request for Gülen’s extradition from the United States, where he is living in self-imposed exile in Pennsylvania.

İstanbul public prosecutor Hasan Yılmaz — who is supervising the investigation that led to the detention of Zaman Editor-in-Chief Ekrem Dumanlı and dozens of others — issued an arrest warrant for Gülen after the operation targeting journalists, scriptwriters, producers and police officers took place on Dec. 14.

Gülen’s legal representative said in the statement, “The fact that there has been no application for judicial assistance in this process, with the aim that these allegations may be used in domestic politics in the run-up to the elections even though it is known that no result can be achieved from this initiative, is itself proof of the political nature of the procedure.”

According to Albayrak: “A red notice cannot be issued for a person who is only being called in to testify. If the person is only going to give their testimony then it is done through judicial assistance.”

As the United States is not a member of Interpol, a red notice would not have any binding consequences. For the US to deport Gülen, the Turkish authorities would have to submit evidence files directly to the US. If the case is accepted by US authorities, the judicial process would be undertaken by federal courts and not the political ruling party, as would be the case in Turkey.

An existing extradition agreement between Turkey and the US is not completely binding; as a result of the principle of national sovereignty, each government has the right to make its own decisions regarding extraditions.

One of the most important articles of the agreement states: “Extradition shall not be granted: If the offense for which extradition is requested is regarded by the Requested Party to be of a political character or an offense connected with such an offense; or if the Requested Party concludes that the request for extradition has, in fact, been made to prosecute or punish the person sought for an offense of a political character or on account of his political opinions.”

Albayrak also said in his statement that for Interpol to issue a red notice for a suspect, the terrorist organization they are apparently affiliated with must be recognized by Interpol. The authorities must then prove, with solid evidence, how the suspect has contributed to the terrorist activities of the organization.

“Applications made with unconvincing evidence are rejected. With this information in mind it is safe to say that the Interpol General Secretariat will not issue a red notice [for Gülen] and the US authorities will not even see the need to forward the case to the courts,” he said.

[Başlık] AK Party co-founder: I don’t believe claims about Gülen
Former Foreign Affairs Minister Yakar Yakış has criticized claims of Gülen being the “leader of a terrorist organization,” saying: “I don’t really think that anything will come of these.”

Yakış, one of the founders of the Justice and Development Party (AK Party), said he does not believe the claims put forth about Gülen, also indicating that the allegations have no basis in international law.

In a statement to Today’s Zaman on Monday, Yakış said: “Saying unbelievable things, especially things like Hocaefendi [master teacher] Gülen is setting up an armed organization, is not right. I don’t even think it’s possible that the Hizmet movement or Hocaefendi are even capable of such things.”

The former AK party deputy also commented on the difficulty of getting a red notice issued, noting that there first has to be solid evidence presented to the authorities issuing the notice as well as making sure that the offence is not political in nature.

Yakış also stated that unease within the European Union towards Turkey has been increasing after the Dec. 14 operation against independent media.

The former foreign minister said the criticisms from the EU were well intentioned. “Views within the European Union towards Turkey are affected by every incident. But it would be wrong if this leads to the halt of [Turkey’s] accession process.”