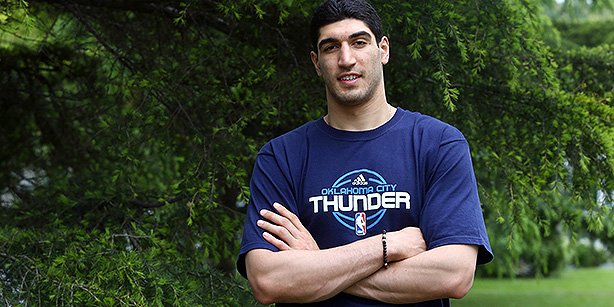 Releasing a written statement late on Tuesday, Kanter said that he was not convinced by team coach Ergin Ataman’s statement to justify his decision to exclude him from the team. “Although I have been repeating my desire to wear the Turkish national team’s jersey over the past two years, the fact that I was not called up is very upsetting. The justifications for this decision are not convincing at all. There is only one reason: I was excluded due to my beliefs and political views,” Kanter noted.

Coach Ataman justified his decision to exclude Kanter at a press conference at İstanbul’s Abdi İpekçi Sports Hall on Tuesday by saying that he had twice tried to contact Kanter but the Turkish center did not return his call. The Justice and Development Party (AK Party) government launched a battle against the Hizmet movement in late 2013 following the exposure of a graft and bribery probe in which senior government members were implicated. Accusing the movement of having orchestrated the probe, the government has since waged a war on Hizmet-affiliated schools, banks, media organizations and individuals. Kantar is thought to have become the latest victim of the AK Party’s battle against the movement as he had previously revealed his links to the Hizmet movement, which preaches tolerance and interfaith dialogue between Islam and other religions.

Kanter, a 23-year-old basketball sensation who joined the Oklahoma City Thunder in February after almost four years at the Utah Jazz in the American National Basketball Association (NBA), said in his statement this week that even though he was not called up for the national team, he would support Turkey at the 2015 European Basketball Championship. “Now it is time for us to unite. Now we need to cast everything aside and support our team fully. Even though I am upset that the opportunity to serve the Turkish nation was taken away from me, we should focus on Turkey’s success in the championship,” Kanter said.

Veteran sports commentator Altan Tanrıkulu made a comparison in a piece published in the Zaman daily on Wednesday between the players who were included in the squad and Kanter. New Orleans Pelicans’ Ömer Aşık’s season average is two points and 7.3 rebounds per game and Detroit Pistons’ Ersan İlyasova has averaged 8.7 points and 4.3 rebounds over the last season. However, Kanter finished the last season with averages of 15.5 points and 8.9 rebounds, respectively.

Hundreds of Twitter users have also supported Kanter with the hashtag #EnesKantersMilliAyıp (National shame over Enes Kanter) and criticized Ataman on the grounds that he made the decision because Kanter has revealed his links to the Gülen movement.

Kantar, who was voted Most Valuable Player (MVP) in the 2009 FIBA Europe Under-18 Championship while leading Turkey’s junior national team to the bronze medal, has been accused of arbitrarily rejecting the national team in the past. A smear campaign was launched against Kanter after the national team lost warm-up games before the 2013 European Championship.

However, Kanter rejected accusations that he left the national basketball team in the lurch in the 2013 European Championship in Slovenia and the 2014 World Cup in Spain, stating that he has always been proud to serve the Turkish national team.