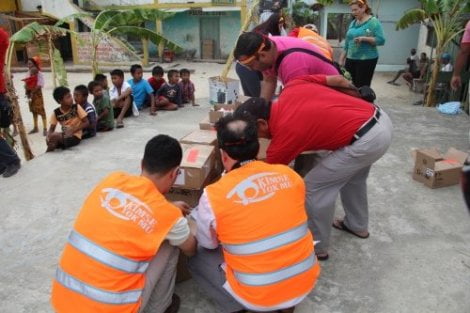 Kimse Yok Mu has provided 50 tons of humanitarian aid to flood-hit people at a camp set up in the town of Chiredzi in Masvingo province, near the border with Mozambique. F. A. Chikovo, an official from the Masvingo provincial authorities, lamented the lack of international aid and said that the state’s resources were insufficient to meet the needs of flood victims. Thanking the Turkish volunteers for their humanitarian efforts, Chikovo stressed the importance of the campaign.

The Asia branch representative of Kimse Yok Mu, İsmail Büyükay, said that the people in the camp face dire conditions and difficulties, a lack of clean water among other problems. He said that those affected should be transferred to another place as the site of the camp is still in the flood zone and vulnerable in case of another flood.

In addition to 50 tons of materials, Büyükay said that the charity group gave $50,000 cash to camp officials to deal with urgent needs.