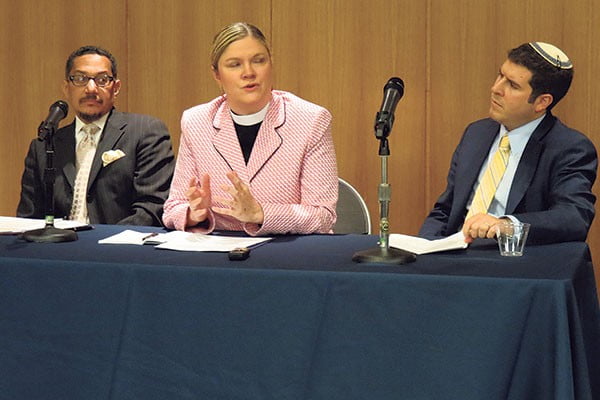 The meeting, which drew some 40 students, teachers, and members of various faith communities, was sponsored by the Peace Islands Institute, an interfaith organization based in Hackensack that seeks “to facilitate a forum of mutual respect and collaboration…for all peoples in a society of different ethnic, cultural, and religious backgrounds.”

Kicking off the discussion, moderator Jonathan Golden, director of the Center on Religion, Culture & Conflict at Drew, asked the audience “How do we combat some of the more extreme elements in each of our faiths?”

One way to counter suggestions that violence can be justified in the name of God, he said, is to “open up the big, big books” that each religion uses as a holy text, noting that scriptural references to peace are far more prevalent than those which sanction harm to one’s enemies in the Torah, the Koran, and the Christian Bible.

Rabbi Jesse Olitzky of Congregation Beth El in South Orange, countering efforts by those who cite textual references to advocate violence, said, “Scripture isn’t necessarily the word of God, but a divinely inspired text. It is a combination of God and humanity. It is not just about believing in peace. It is not about standing idly behind and waiting for it to happen. It is making sure that the struggle for peace become part of our daily lives.”

Compton said her faith demands personal involvement — “that we put some skin in the game when it comes to practicing peace and we build experiences into our worship that allows us to practice it.”

But, she said, one of Christianity’s “most difficult teachings is to love our enemies. I take comfort that Jesus said ‘love’ and not ‘like,’” she said, indicating that striving for peace does not have to entail making friends of one’s adversaries.

“We give a greeting of all the messengers and prophets — Shalom aleichem, Salaam aleikum, Peace be upon you…. It is giving a greeting that is a reminder that we, as human beings, are supposed to be people of peace,” he said.

Asked by Golden to name a person who inspired each panelist to work for peace and justice, Compton cited Leymah Gbowee, a Lutheran activist in Liberia who organized Women of Liberia Mass Action for Peace. For her efforts in helping to end to the Second Liberian Civil War in 2003, Gbowee was awarded a Nobel Peace Prize in 2011.

Shareef said that during the racial struggles of the 1960s he subscribed to a definition of his religion that came from Nation of Islam leader Elijah Muhammad that embodied the American ideals of freedom, justice, and equality.

“For Muslims that was not necessarily the definition of Islam, but for African-American people in the ’60s that was the definition that resonated with us,” said Shareef, an African-American. He said one of his role models was Elijah Muhammad’s son, W. Deen Muhammad, who disbanded the Nation of Islam in 1976 and transformed it into an orthodox mainstream Islamic movement. In doing so he rejected the Nation’s strict advocacy of racial separation and his father’s claim of being a prophet.

Shareef also saluted Frederick Douglass, the former slave who became the leader of the abolitionist movement. “He existed at a time when there was practically no peace, not only for black people, but there was no peace for white people, either. He became a spokesperson not only for the freedom for African-American people but he became a spokesperson for the freedom of human beings, period, as a reminder of how a human being is supposed to treat other human beings,” said Shareef.

Referring to the Passover celebration of Jewish freedom from Egyptian bondage, Olitzky talked about the obligation to empathize with the slaves. “In every generation it is an obligation to see ourselves as if we were freed from Egypt…to use the story of freedom, justice, and equality as a trigger to help us understand that in every generation we need to be a part of the fight for freedom, justice, and equality.”

Olitzky praised three fellow rabbis as pursuers of peace. One was Joachim Prinz, who served as religious leader of Temple B’nai Abraham in Newark, then moved with the congregation to Livingston. Prinz, a refugee from Nazi Germany, was an outspoken advocate of the civil rights movement; a close ally of the Rev. Martin Luther King, Prinz introduced the civil rights leader when he delivered his “I Have a Dream” speech at the 1963 March on Washington.

Another man Olitzky mentioned was Rabbi Seymour Atlas, who lost his pulpit at the then-Orthodox Agudath Israel Etz Ahayem Synagogue in Montgomery, Ala., after endorsing the African-American boycott of the city’s segregated buses on Rosh Hashana in 1955.

Like Prinz, Rabbi Abraham Joshua Heschel, an eminent Conservative educator and theologian, was a close associate of Dr. King’s. Heschel described marching with King against segregation in Selma, Ala., as “‘praying’ with my feet, and that is a part of what our faith tells us to do,” Olitzky said.

A group of about 130 people gathered at Redmond United Methodist Church (RUMC) for dinner on Sunday evening. But rather than a room full of Christians, as the venue may imply, the dinner was the Interfaith Friendship Iftar Dinner and contained a mix of members of the RUMC as well as members of thePacifica Institute […]