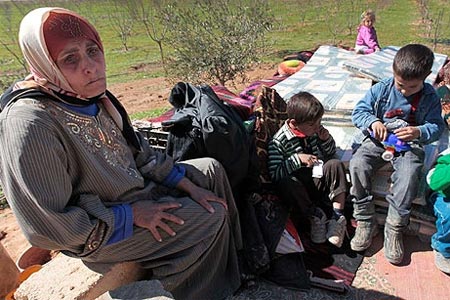 Because the clashes have become a civil war in Syria, tens of thousands of people have escaped and are taking refuge in Turkey, Jordan and Lebanon. The Turkish government is fully mobilized for the refugees, but in Lebanon and Jordan the Syrians are in a difficult situation.

Kimse Yok Mu rolled up its sleeves to deliver aid to the Syrian refugees who left their countries because of civil war and are taking refuge in Jordan and Lebanon. KYM sent a team to Jordan and Lebanon to  negotiate with local authorities about what can be done to aid the citizens and also to have the opportunity to see, first hand, the situation of the refugees.

A large majority of the Syrian refugees who are taking refuge in Jordan and Lebanon are women and it has been identified that their biggest needs are food, baby necessities, blankets and cleaning supplies.

KYM rushed to the aid of the needy in many parts of the world with the sincere support and assistance of the Turkish people and are now launching a campaign to help our Syrian brothers and sisters.

With the words: “It doesn’t suit you when you are full and your neighbor is hungry”, KYM is calling for your support in the Syrian Refugees Campaign to help people who have been forced to flee their homeland.