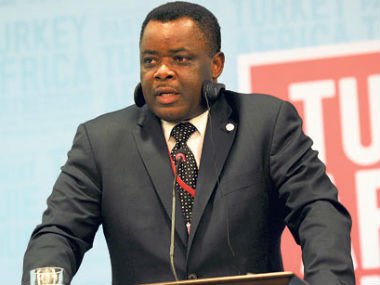 Being president of the Africa Union, which consist of 54 African countries, Esono said Africa can only solve its current problems through education and the demand for schools is increasing day by day, Turkish schools play an important role in meeting this demand, but more Turkish schools are needed.

African Union President and Equatorial Guinea Foreign Minister Eustaquio Nseng Esono, speaking to Today’s Zaman on Sunday, said he would like to see the number of Turkish schools on the African continent rise.

After attending the Turkey-Africa Partnership Ministerial Review Conference held on Friday in İstanbul, Esono said Africa can only solve its current problems through education and that the number of Turkish schools in various countries in Africa should be increased. Being president of the Africa Union, which consist of 54 African countries, Esono said the demand for schools is increasing day by day, Turkish schools play an important role in meeting this demand, but more Turkish schools are needed.

Noting that the European Union shut down all its member states’ embassies in African countries and left the continent to its fate during troubled times in Africa, Esono said: “The diligent efforts of Turkish schools in Africa gives us hope in our difficult times on the continent. Turkish people are always with us, and they are so sincere and humanitarian.”

Stating that they won’t forget the aid efforts of Turkey to help the Somali people in fighting famine, Esono said they are ready to help Turkey at any time when it is necessary, the Turkey-Africa partnership will last forever, and Turkey is the first country that the African Union completely trusts.

Noting that European countries are only interested in their economic interests in Africa, Esono added that African countries have been exploited for ages by France, England, Spain and Germany. “Western countries always have taken something from Africa and then left us to our fate after the end of colonialism on the continent. Africa was a very rich continent, but western countries didn’t let us use our own sources,” Esono said.

Pointing out that previous partnerships with western countries have deteriorated so they don’t trust them any more, Esono said, “Although their partnership with Turkey is so new, this has created very positive effects so far, and we plan to expand partnership between Africa and Turkey through new efforts in the areas of agriculture, commerce and banking in 2012.”

About the candidacy of Turkey to the EU, Esono said “Turkey has been an important actor in Europe, the Middle East and now in African countries. The EU needs Turkey, and I believe the EU will invite Turkey itself in the near future.”