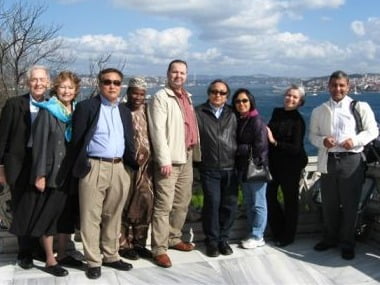 In Istanbul, a modern bridge spans the Bosporus between Asia and Europe. Symbolically, the bridge reaching between the cultures of Turkey and the West, now extends also between Anatolian Muslims and Christians and Northern Illinois Conference United Methodists.

At the invitation of the Niagara Foundation in Chicago, Bishop Hee-Soo Jung led a delegation of Northern Illinois interfaith leaders from the Commission on Christian Unity and Interreligious Concerns on a 10- day journey through Turkey from October 19–29.

A year ago at a dinner at the Turkish American Society of Chicago during the Bishop’s Interfaith bus trip, the invitation was made by Niagara Foundation of Chicago to be their guests in an educational journey across the cultures of east and west, Muslim and Methodist. The United Methodist delegation was ably guided by Chicago Niagara Executive Director Sherif Soydan and Assistant Director Hakan Berberoglu into the deeply hospitable culture of Turkey.

The Niagara Foundation has helped the United Methodist Church and its congregations in building relations with the MuslimTurkish people of the Chicago area over several years. It has done this through dinners, Iftars, luncheon speakers, dialogues, exposure to their creative science education program, mystic Muslim Rumi, and Sufi whirling dervish performances. Niagara’s vision, within Allah’s mission, is to make Chicago a place of peace, cross-cultural tolerance, and human dignity. They find inspiration for this vision in the work of honorary president M. Fethullah Gulen, a world renowned Muslim scholar. His message of love, tolerance, and peaceable coexistence has catalyzed a movement through faith-based scientific education and interfaith dialogue within Turkey, Central Asia, and worldwide for a harmony of (not clash of) civilizations.

Through the auspices in Turkey of the Atlantic Association of Cultural Cooperation & Friendship (Bakiad), Niagara arranged for our delegation to meet Gulen supporters, journalists, school administrators, government officials, and Armenian and Syrian Orthodox church leaders. While traveling through Istanbul, Ephesus, Ankara, Rumi’s Konya, early Cappadocia cave churches, Abraham’s Sanliurfa, and Mardin—southeast city of Kurds, Arabs, Turks, Muslims and Christians, the delegation soaked up new learnings—historic, cultural, and generous Turkish hospitality. In multiple meal settings, including family dinners in homes, conversation quickly moved to intentional interfaith dialogue, and the mandate God/Allah lays on us all to love God, and love (in deed) the whole human family.

Perhaps the most important treasures of trip are what the group brought back—that both Turkey and Chicago are crucibles of diversity in which the relation of religions, cultures, politics, and civil and human rights are being ground out for the 21st century. We found that Turkish Muslims in the Gulen movement and United Methodists both operate out of a “movement” model of personal and communal accountability under God. What comes next is deepening here, through mutual hospitality, the friendships begun. Such friendships are the foundational construction of the bridge across cultures which leads to the peaceful shore.

In the West, especially in the United States, an increasing number of scholars have discovered Gülen to be a man of love and tolerance and consider his teaching as a model of dialogue.