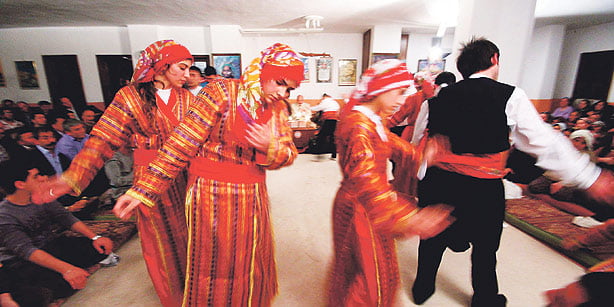 Greeks, Jews and Armenians are considered the only religious minorities in Turkey. However, Alevis have been traditionally considering themselves a minority because their interpretation of Islam differs from the state’s understanding.

There is no definition of Alevism that Alevis themselves have agreed upon. In very general terms, it is summarized as loving Ali, the son-in-law of Prophet Muhammad. The differences between Alevis and Sunnis are not openly discussed, but mutual prejudices are prevalent. For a not insignificant number of Sunnis, Alevism is an aberrant form of Islam.

Recently, Alevi problems have come to the agenda following the Gezi events. All five of the young protesters who died during the protests turned out to be Alevi. A police report argued that an overwhelming majority of protesters were Alevis. Rightfully, such a report led to concerns of discrimination among Alevis since the state is notorious for illegally profiling its citizens. Alevi opinion leaders admit high degree of Alevi involvement in the Gezi protests on the grounds that Alevis have long lasting problems of discrimination and an accumulation of frustration.

Alevis have held historical resentments since the 16th century when they were subject to mass killings during the Sunni Ottoman and Shia Safavid state. As a result, the sultans of the era, Suleiman the Magnificent and particularly Yavuz (Selim I) have become figures of hatred in the collective memory of the Alevis. The massacres of Alevis during the modern Turkish Republic only added to their mistrust of the Sunni majority and their disappointment with the secular state which failed to deliver Alevis their expectations. During the Justice and Development Party (AK Party) governments, Alevis have become even more frustrated, especially after people booed when Prime Minister Recep Tayyip Erdoğan said in a rally that main opposition leader Kemal Kılıçdaroğlu is Alevi. They were further offended by the decision to name the third bridge on the Bosporus after Yavuz. Most recently some in the media called Gezi an Alevi uprising, which bothered many Alevis.

In such a climate, the Abant Platform organized [a Gulen Movement affiliated organization] a three-day-long meeting by Lake Abant over the weekend, bringing representatives from the Alevi and Sunni community. Personally, I learned a lot from the meeting which almost served as a channel for venting for Alevis. It was impossible not to sense the accumulated frustration of Alevis at the government. What was striking to me is how vivid the bitter memories of the 16th century are among Alevis. Their sense of insecurity is not over; on the contrary, they are even more disappointed because even Mustafa Kemal Atatürk did not keep his promises to them by excluding Alevis during the foundation of the Religious Affairs Directorate (DİB) and by closing the religious orders that are the only way the Alevi faith is transmitted from generation to generation.

Currently, Alevis are disappointed because the majority of them do not believe that the government’s Alevi initiative and workshops to take care of the problem were sincere.

What do Alevis want? Based on my three-day-long observations, their expectations from the state are pretty clear. In a nutshell, they ask for equal citizenship. But then again, who doesn’t in Turkey? Not to underestimate the significance of Alevi grievances, but almost all segments of society have suffered from the official regime in Turkey, Kurds, religious Muslims and non-Muslims to name a few.

Alevis also want the recognition of their prayer houses (cemevis) and ask the state not to tell them where they can or should practice their faith. Indeed, it seems pretty primitive to me that as of 2013 we are still trying to let people define who they are, what they believe or not. Alevis seem to be convinced that the state is trying to impose a Sunni version of Islam on them through the DİB.

Almost without exception, Alevis are unhappy with the existence of the DİB as it is a centralized Sunni organization that takes advantage of taxes of all citizens, but delivers services to only Sunnis. Some ask equal share from DİB services while some others want the complete abolition of such an institution. In a truly secular state, DİB should be unthinkable and religious services should be left to communities.

One other Alevi demand is the abolition of required religious courses in schools. Personally, I do not think it should be state’s responsibility to teach any religion to anyone. It is against secularism, of course in the true sense of it.

None of the above wishes of the Alevis are excessive. It would be in the interest of Turkey to pay attention to the legitimate demands of its citizens to avoid further polarization.

I congratulate the Abant Platform for such a timely meeting and efforts to make a positive contribution to the national agenda, which is poisoned by conspiracy scenarios. After all, actions always speak louder than words, at least in the long run…

Emre Uslu The Turkish public has recently been discussing Kurdistan Workers’ Party (PKK) leader Abdullah Öcalan’s peace offer to the Gülen movement. Many observers saw this as a surprise step from Öcalan. Last week I had the chance to speak with both Kurdish politicians and followers of Gülen in the Southeast. Unlike widely believed rumors, […]