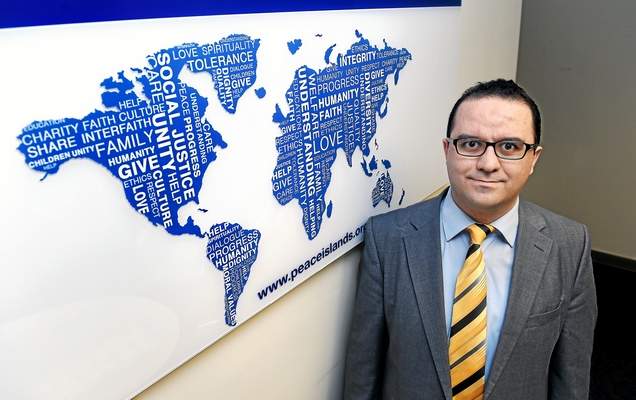 (Arnold Gold-New Haven Register) Mehmet Erdogdu, Director of the Connecticut chapter of the Peace Islands Institute, is photographed in the New Haven office on 3/10/2015.

In his office at Church and Elm streets, Mehmet Erdogdu is working on bringing people of differing background and views closer together.

But the institute is not just working toward an abstract goal of “having charity for everyone in our heart,” as Erdogdu says. It is bringing together people of the Jewish, Christian and Muslim faiths — and those of no faith at all —to talk about ways to foster understanding and to honor those who do.

Its upcoming fifth annual Friendship Dinner on March 26 will feature Daniel Esty of Yale University, a professor of environmental studies who served as state commissioner of environmental protection, as guest speaker.

“This is our signature event of the year,” said Erdogdu, a Turkish-American Muslim. “We invite community leaders, political leaders … clergy people from different interfaith groups … people from all walks of life.”

“We always look for society’s problems and solutions to that,” said Erdogdu. “So the environment is a very important part for the world and human being and we need to take care of it and be aware how we are behaving” toward our world.

Before that, on March 24, the institute will bring together Mahmoud M. Ayoub of Hartford Seminary and Neset Ulusal of Quinnipiac University to discuss “Muslim Voices Against Extremism” at Quinnipiac. The institute, one of five branches in five states, also plans a law enforcement appreciation dinner on May 28.

Peace Islands Institutes bases its philosophy on the teachings of a Turkish Muslim, Fethullah Gulen, an “education activist and peace advocate,” according to Erdogdu. “After the 9/11 attacks, he was the first Muslim scholar condemning the attacks. He’s a moderate Muslim and he’s known for his dialogue and tolerance.”

The Connecticut chapter, founded 1½ years ago, is based on the ninth floor of the First Niagara Bank building at 195 Church St., where it promotes “peace, understanding and dialogue through society by bringing people together from different backgrounds, different faiths,” Erdogdu said.

The institute does this through its five centers: global affairs, social affairs, interfaith affairs, education and media.

An important part of the Center for Interfaith Affairs is the institute’s “Abraham’s Table,” which has sponsored events such as a discussion of how different faith traditions understand peace.

“We’re seeing a lot of negative things in the news,” Erdogdu said. “We believe that with the Peace Islands Institute’s work we can educate people and raise the culture of living together or coexistence. These are really solutions to the biggest problems of society, so that’s what motivates me.

“We are a nonprofit, small organization but we are doing really important work,” he said.

Much of the work involves breaking down stereotypes, which is why Abraham’s Table is so vital. And the group has established a Global Leaders Forum for high school students. While fewer than 10 students signed up last year, “our aim is 40 to 50 students … to raise our kids as global leaders in the New Haven County schools to give these values to our youth,” Erdogdu said.

But is Peace Islands Institute providing a voice that can be heard above the din of disunity? “I believe that, yes, we are being effective. We had really good turnout at [last year’s] Friendship Dinner.” Gov. Dannel P. Malloy, U.S. Sen. Chris Murphy and Attorney General George Jepsen have attended.

Misunderstanding is “like a tree with branches,” Erdogdu said. “It’s because of disunity our kids don’t know about others’ culture.”

Rabbi Herbert Brockman of Congregation Mishkan Israel in Hamden Israel is a member of the Connecticut chapter’s board and said his congregation has taken part in Peace Islands Institute’s interfaith efforts.

“They’ve had conversations with Christians, Jews and Muslims … One year, we did fasting in our different traditions,” Brockman said.

“They’re a good symbol of the Muslim community that’s trying to make an impact in terms of interfaith and peace … and helping people to learn about Islam.”

Brockman said that recently the Turkish government has become more right wing and that Gulen, the philosophical leader of the PII movement, has come under criticism. In fact, the institute issued a report about freedom of the press in Turkey in 2014, criticizing the government of Erdogdu’s native country for muzzling the media.

The Rev. Anthony Ciorra of Sacred Heart University in Fairfield said he’s been involved with Peace Islands Institute for 10 years, before the Connecticut chapter was founded. He is assistant vice president for mission and Catholic identity at SHU.

“My experience of Peace Islands is they do exactly what they say in terms of who they are,” Ciorra said. “Their work is one in which they create relationships. … What they do is bring together people of various religious traditions … to have conversations with one another to begin to take down walls that might separate us.”